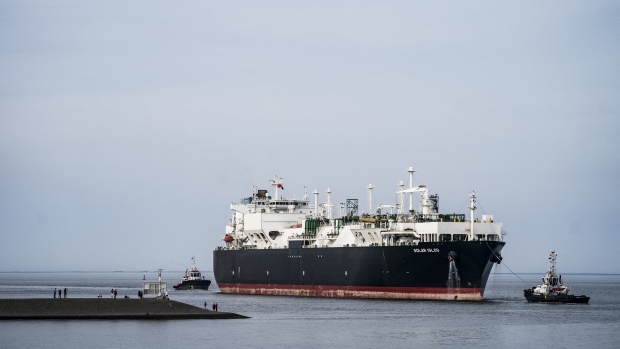 (Bloomberg) -- Two floating liquefied natural gas terminals are setting up in a Dutch port, the first in a wave of the specialist tankers that Europe is banking on to ease the worst energy crunch in decades.

The Golar Igloo and the Eemshaven LNG are berthed together in the northern seaport of Eemshaven. Both are floating storage and regasification units, or FSRUs, designed to convert the super-chilled fuel transported on seagoing vessels into gas that can be pumped into onshore networks. The terminal officially opened on Thursday with the arrival of the first shipment from the US.

The ships’ arrival before winter will be crucial in helping Europe through a deepening fuel crisis after Russia slashed gas deliveries in retaliation for sanctions imposed over its invasion of Ukraine. Soaring energy prices have pushed economies to the brink of recession, forcing governments to fast-track the use of floating gas terminals that take a fraction of the time to set up than their onshore versions.

The vessels’ popularity is spreading. Germany, which used to get more than a half of its gas via pipelines from Russia, is now chartering five FSRUs through the government and two more that will be privately rented. Three of the ships are slated to start this winter. Italy, France and the Baltic countries are also planning or investigating floating terminals to import LNG.

Read more: Excelerate Energy to Replace a 10th of Russian Gas in Europe

In Eemshaven, a deepwater port on the northeast tip of the Netherlands, a so-called commissioning LNG cargo arrived to prepare the facility for its first commercial shipment in mid-September. Both of the FSRUs are rented for five years, and together are called EemsEnergyTerminal, which is expected to receive, unload and ship about 18 LNG cargoes by Dec. 31.

The LNG tanker Murex, loaded at Cheniere Energy Inc.’s Sabine Pass project on the US Gulf Coast, arrived Thursday at the new terminal, ship-tracking data on Bloomberg show. The US has channeled record volumes of LNG -- pitched as “freedom gas” by the Trump administration -- to the continent this year.

The first gas will be put into the grid by next week, Han Fennema, chief executive officer at Nederlandse Gasunie NV, said at the opening ceremony for the floating terminal. Gasunie is the operator of the facility.

As well as the Netherlands, the new terminal will serve countries that don’t have access to the super-chilled fuel such as landlocked Czech Republic, whose prime minister attended the opening ceremony.

FSRUs are typically moored permanently near shore. An arriving carrier then transfers LNG to the unit, which stores and turns the cargo into high-pressure gas. The vessels tend to be faster, cheaper and more environmentally-friendly to develop compared to an onshore solution, though their capacity is much lower.

The EeemsEnergyTeerminal’s capacity of 8 billion cubic meters has already been sold to Engie SA, Shell Plc and Czech utility CEZ AS. The amount is equivalent to the annual gas consumption of all households in the Netherlands, according to Ulco Vermeulen, an executive board member at Gasunie.

As more LNG production plants come on stream by the middle of the decade, more facilities to convert cargoes into gas are expected, with 20 new terminals proposed for continental Europe, according to Helge Haugane, a senior vice president for gas and power at Equinor ASA. That will allow Europe to have a “brighter” outlook even without Russian gas, he said in an interview at the Gastech industry conference in Milan earlier this week.

“This marks a significant moment in our efforts to end Russian gas and replace with gas from other parts of the world,” Dutch Energy Minister Rob Jetten said at the ceremony overlooking the new facility. “Hopefully more FSRUs will open in Europe soon and this will have an impact on the price of gas.”