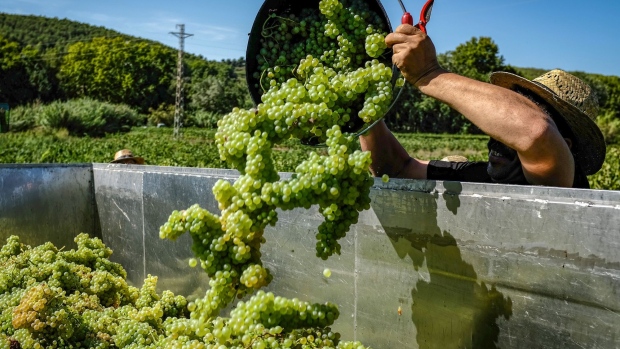 A worker empties a bucket of picked Macabeu grapes into a truck during harvest at the Cal Bola vineyard belonging to the Bodega Pares Balta in St. Marti Sarroca, Barcelona, Spain. , Bloomberg

(Bloomberg) -- This year’s wine harvest is set to be historically low in Europe after drought, hail and disease damaged crops. Even so, the quality of the grapes will be higher.

Production in Italy, France and Spain, Europe’s major wine producers, is expected to drop 18% from a year ago to 117.3 million hectolitres, according to farm lobby group Copa & Cogeca. France’s harvest suffered the most, with output forecast to drop by a third after spring frosts and summer humidity decimated crops.

“Notwithstanding the variability and the uncertain climatic conditions, the quality of the grapes is considerably higher and bodes well for quality wines,” the group said in the statement.

Portugal is the only country where there may be a slight increase in the harvest. German output is expected to be little changed.

Other crops have also suffered from bad weather this year, including frost that hit sugar-cane crops in Brazil and a prolonged drought in North America that damaged wheat.