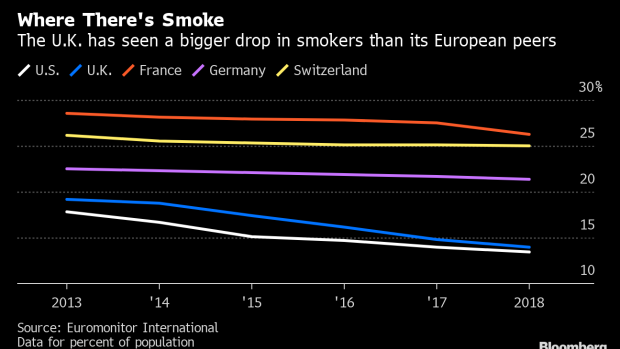 (Bloomberg) -- In vaping, the special relationship is coming undone.

While U.S. President Donald Trump has vowed to “do something very, very strong” after hundreds of reported cases of lung illnesses related to electronic cigarettes, public health officials in the U.K., the biggest market in Europe for the products, endorse vaping as a way to wean people off smoking.

It’s the prevailing view across Europe, where authorities are more sanguine because the ailments popping up in the U.S. have largely been linked to vaping liquids laced with THC, the psychoactive compound in cannabis, which is off-limits in much of Europe. Use among European teenagers is also much lower than in the U.S., as is the nicotine content in popular vaping products.

“If you’re a smoker and you have not stopped smoking, try vaping,” Martin Dockrell, head of tobacco issues at Public Health England, said in an interview posted on his Twitter feed this month. The government agency has repeatedly said vaping is 95% less harmful than cigarettes.

The response to the vaping crisis underlines a deeper difference in the two regions’ approach to smoking alternatives. U.K. health bodies are leading a push for acceptance of products such as Imperial Brands Plc’s Blu and British American Tobacco Plc’s Vype as a way to get people to quit smoking, which is linked to cancer, heart disease and other ailments. Conversely in the U.S., which has seen countless tobacco lawsuits over the past decades, cigarette alternatives are feared to be a possible gateway into smoking.

What aligns both regions is that smoking rates have fallen, while vaping numbers have climbed. In the U.S., about 13% of the population smoked cigarettes last year, down from some 18% in 2013, according to Euromonitor International. In the U.K., the rate has come down to 14% from 19%, while declines have been slower in countries like France and Germany.

The U.K. is Europe’s No. 1 vaping market, with 6.3% of the adult population using such devices, but far fewer British teenagers vape than their counterparts in the U.S. About 1.6% of 11- to 18-year-olds said they used e-cigarettes more than once a week, according to a Yougov survey published by anti-smoking group Action on Smoking and Health in June. The Health & Human Services Department said Wednesday that the proportion of regular vapers among U.S. high school students has risen to one in four, citing preliminary data from a new survey.

U.K. authorities said they received 62 reports over the past three years of adverse reactions suspected to have been caused by vaping. Meanwhile, there have been more than 450 reports just this year about the mysterious symptoms linked to the practice in the U.S.

Vaping liquids that contain THC are hard to find in Europe, which may explain why the EU hasn’t seen similar health scares as in the U.S. State health officials in New York have pointed to vitamin E acetate as a likely culprit for the respiratory symptoms, as the substance has been found in some products used to inhale THC.

Europe’s effort to push cigarette smokers toward vaping and heated tobacco devices is rooted in a public health approach called harm reduction that gained acceptance in the 1980s for prevention of HIV and other diseases among sex workers and injecting drug users. The approach seeks to diminish the impact of risky behaviors by promoting infection-blocking tools like clean needles and condoms. The strategy contrasted with efforts like the “Just Say No” anti-drug campaign championed by Nancy Reagan.

“We are clear vaping is not without risks, but compared with smoking tobacco it is far less harmful,” said Rosanna O’Connor, director of alcohol, drugs and tobacco at Public Health England.

European authorities have combined their embrace of e-cigarettes with tougher regulations -- restricting marketing to children, for example, and imposing lower limits on nicotine content -- that have made the new devices more acceptable to health officials. The U.K. prohibits vaping companies from targeting teens. Real or fictitious characters that could appeal to youths are banned, as are depictions of e-cigarette users who appear to be under 25.

London-based BAT says it shares the U.S. Food and Drug Administration’s concerns that marketing of some flavored vaping products could appeal to children.

“At the same time, it is hard to overestimate the role that the responsible marketing of flavors plays in helping adult consumers move on from combustible products to alternative tobacco and nicotine products,” BAT said in a statement.

Michael R. Bloomberg, the founder and majority owner of Bloomberg News parent Bloomberg LP, has campaigned and given money in support of a ban on flavored e-cigarettes and tobacco and supports efforts to reduce global demand for tobacco worldwide.

Some European countries have highlighted risks of e-cigarettes, including addiction and the possibility that they could encourage users to take up smoking. An August report sponsored by the German health ministry concluded that while they may help smokers quit, they should be regulated more strongly to reduce the public’s use of the products and prevent cardiovascular risks.

“In the U.S. there’s still this mindset that what is the enemy is the tobacco industry, not the harms from smoking,” he said.

--With assistance from John Lauerman and Tim Loh.

To contact the reporters on this story: Thomas Mulier in Geneva at tmulier@bloomberg.net;Corinne Gretler in Zurich at cgretler1@bloomberg.net

To contact the editors responsible for this story: Eric Pfanner at epfanner1@bloomberg.net, Benedikt Kammel