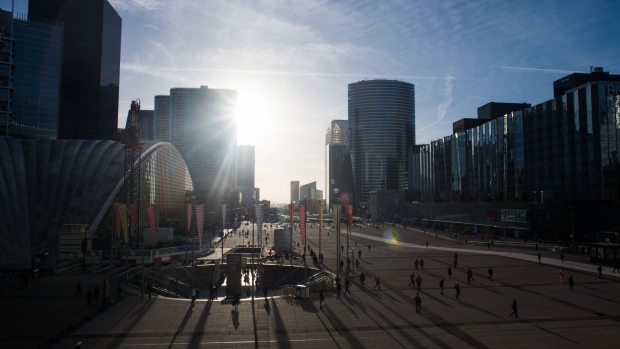 Office workers commute to work in the La Defense financial district of Paris, France, on Thursday, Oct. 7, 2021. France’s economic outlook improved over the summer despite a surge in cases of the delta variant, suggesting an increased vaccination rate may have ended the stop-go disruption of the pandemic. Photographer: Nathan Laine/Bloomberg , Bloomberg

(Bloomberg) -- The European Union plans to soften the blow to banks from new capital rules, arguing that an easier stance ensures lenders can keep funding the economy as it recovers from the shock of the pandemic.

In its implementation of the global banking standards known as Basel III, the European Commission will include flexibility on several issues banks had lobbied for while stopping short of meeting the industry’s key demand of retaining significant freedom to assess the riskiness of their own loans, according to a draft proposal seen by Bloomberg. On average, banks will see their capital requirements rise by less than previous predictions.

Global regulators spent a decade after the financial crisis forcing banks to boost their equity reserves to avoid a repeat of the 2008 credit crunch and the ensuing bailouts by taxpayers. European lenders still face a bigger jump in required capital levels than their more profitable U.S. peers, as the full weight of the Basel accords finalized in 2017 is phased in by the EU this decade.

Here are some of the main points in the proposal, which could still change before its scheduled publication on Wednesday:

The measures are expected to increase banks’ capital requirements by as much as 8.4% on average by 2030. The European Banking Authority said last month that the Basel III standards would drive up the Tier 1 capital requirements of 99 banks by 13.7% on average, based on data from the end of 2020. The industry had sought to limit the increase to about 5%.

The proposal includes a hard limit on the degree to which banks are allowed to estimate their own risk, known as the output floor. That was necessary because some lenders took a rosier view than warranted, yet the industry still lobbied to largely circumnavigate the output floor. The commission suggests that it wants to “strengthen the risk-based approach” rather than replace it with a one-size-fits-all approach.

Banks will eventually face higher capital requirements for loans to companies that don’t have credit ratings. It’s a move that lenders and some government officials had warned could hurt the economy because European companies rely on bank loans rather than bond markets and often don’t have such ratings. However, the commission suggests that banks be allowed to treat such loans as investment grade as a “transitional arrangement,” depending on their probability of default.

The commission suggests that European countries have the option to allow banks to apply for preferential treatment of “low-risk” loans secured by residential mortgages. The EBA would monitor that transitional treatment, according to the draft seen by Bloomberg.

The commission also wants to introduce harmonized definitions of environmental, social and governance risks suggested by the EBA into the EU’s banking rules. Banks will be required to report on these to their relevant regulators.

The commission said it opted not to give regulators new powers to restrict dividends and share buybacks by banks after the watchdogs said they didn’t need the power. The European Central Bank’s de facto ban on such payouts last year hit the share prices of lenders and was criticized as potentially undermining confidence in the industry.