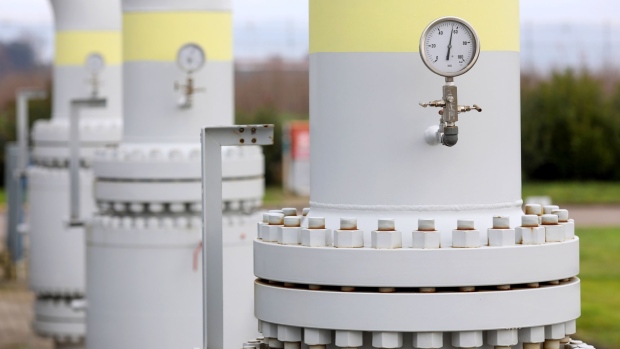 A pressure gauge on suction filters at the Messina Compressor Station, operated by Snam SpA, in Gallese, Italy, on Wednesday, Dec. 29, 2021. European gas prices declined to near the lowest level in three weeks, with increased inflows at terminals in the region bringing relief to the tight market. Photographer: Alessia Pierdomenico/Bloomberg , Bloomberg

The European Union proposal to classify investment in some natural-gas and nuclear projects as sustainable exposed deep divisions among member states, underscoring the challenges facing the bloc as it reaches for an ambitious climate-neutrality goal.

Green politicians in Austria and Luxembourg criticized the draft measure, saying it could damage the credibility of the new rulebook and threaten to divert investment away from renewables. Yet the biggest political group in the European Parliament threw its weight behind the plan, saying it would help accelerate emissions reductions.

Opponents are pressuring the European Commission to modify its plan, knowing they face a difficult task in trying to block it at a later stage. The commission is using a special scrutiny procedure that would require at least 20 member states -- representing at least 65 per cent of the EU’s population -- to collectively reject the rule in coming months, which is very unlikely. Several key countries, including France, strongly support the inclusion of nuclear power.

Austria’s climate and energy minister, Leonore Gewessler, called on the EU executive to change the proposal or risk legal action.

“Greenwashing atomic energy and fossil gas is completely unacceptable,” Gewessler said Monday in an interview broadcast on ORF radio. “Finance markets need a credible label. That’s why this is so important.”

Germany, which is relying more on fossil fuels as it tries to phase out nuclear energy by year’s end, is split on the proposed changes to the rulebook, known as taxonomy. A joint government position will be set by the end of the month.

“The proposals in the European Commission’s delegated act on gas are in line with the position of the German government, even if from our point of view such an act isn’t needed,” Chancellor Olaf Scholz’s chief spokesman, Steffen Hebestreit, said Monday. “We categorically reject the conclusions on nuclear power.”

In a proposal sent for consultations to member states Friday, the commission wants to put a temporary green label on gas projects that replace coal and emit no more than 270 grams of carbon dioxide equivalent per kilowatt-hour. Those facilities would have to obtain construction permits before 2031 and have plans to switch to renewable or low-carbon gases by 2036.

Nuclear energy could be classified as sustainable if the new plants granted construction permits by 2045 meet a set of criteria to avoid significant harm to the environment and water resources, according to the draft seen by Bloomberg News.

The EU taxonomy is closely observed by investors worldwide as a tool to guide private finance in the region’s ambitious transition to climate neutrality. The challenge is to ensure the decision on how to treat nuclear and gas gets political support in the 27-nation bloc while avoiding the risk of greenwashing, or overstating the significance of emissions cuts.

The commission said Saturday that gas and nuclear could “facilitate the transition toward a predominantly renewable-based future.” Europe wants to reach carbon neutrality by mid-century under the Green Deal, a sweeping overhaul meant to accelerate pollution cuts.

“By using gas as a bridge technology, we can achieve CO2 reductions faster by moving away from, for example, coal without having to wait for fully carbon-free technologies to be widely available,” Esther de Lange, a senior member of the European People’s Party in the EU Parliament, said in an email. The group also sees a role for nuclear in the energy shift.

Giving a temporary green label to certain gas projects could facilitate investments in cleaning up coal-based heating systems in countries such as Poland. That’s an argument often raised by East European politicians.

The role of atomic power has pitted Germany, Denmark and Luxembourg against France, Czech Republic or Finland, which want to rely on reactors in the clean shift.

“The green transition is the best thing that’s happening right now,” Finland Economy Minister Mika Lintila said. “It’s driving global investments at the moment, but it must be done in a way that’s realistic and without destroying Europe’s competitiveness.”

Member states and the Platform on Sustainable Finance have until Jan. 12 to provide feedback. The Commission then will adopt the delegated act later this month.

After that, the plan goes before the European Parliament and national governments in the EU Council for scrutiny.