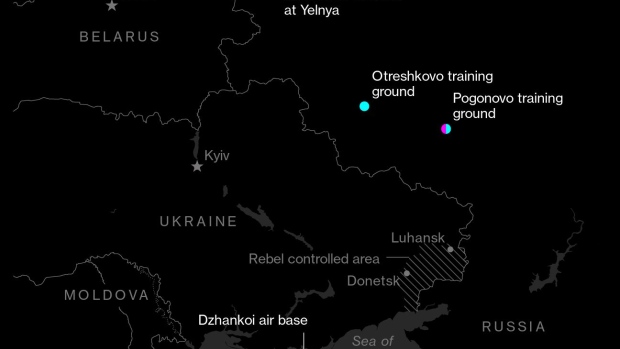 (Bloomberg) -- European powers are increasingly worried that even if Russian President Vladimir Putin doesn’t invade Ukraine he’ll create a “new normal” of heightened tensions for Europe and the U.S. to grapple with, according to people familiar with the discussions.

As the U.S. and its allies struggle for a sense of Putin’s true intentions, their attention is turning to what might happen either alongside, or in place of, a full military attack.

Those scenarios range from Russia keeping some troops or equipment on the Ukraine border for longer, to carrying out cyberattacks on European nations or undertaking activities designed to undermine Ukraine from within, the people said. Given he has massed troops near Ukraine before, only to withdraw them, the Russian president may need other avenues to keep European countries and the U.S. guessing and on their toes.

Talks so far with Russia have been inconclusive on Moscow’s likely next steps. Putin has said he has no current plans to invade Ukraine -- having already annexed Crimea in 2014 -- but is demanding security guarantees from the North Atlantic Treaty Organization that the military alliance says it cannot provide.

European nations are therefore gaming out options that go beyond a straight invasion, even as that remains their primary concern. While discussions continue about strengthening NATO’s eastern flank, there is also a greater awareness of the need to bulk up resilience to cyberattacks, the people said.

That concern was only heightened on Friday with Ukraine saying a cyberattack brought down the websites of several government agencies for hours, the worst onslaught in four years. No group immediately claimed responsibility but 70 government agencies were hit.

Already last month, European Union foreign policy chief Josep Borrell warned the bloc’s leaders in a closed door meeting it was possible Russia sustains a semi-permanent military position near its western border. He also warned that Moscow could accompany any move against Ukraine with hybrid action elsewhere, including cyberattacks. Borrell repeated his concern this week to EU defense ministers about cyber weaknesses.

European Union governments planned this week to kick off a large-scale simulation of cyberattacks against multiple member states, which will run for as long as six weeks. Ukraine meanwhile has made some strides in recent years with its own cyber defenses, officials said.

In conversations with European officials this week, the U.S. warned of three potential scenarios that could trigger sanctions: A full military invasion, an attempt to engineer a coup against Ukrainian President Volodymyr Zelenskiy and other efforts to destabilize Ukraine from within.

Intelligence officials have spoken previously of heightened disinformation campaigns inside the country likely carried out by Moscow, and one person familiar with the U.S.-Europe discussions said the issue of combating foreign interference and information in Ukraine had come up.

One European official said it would be difficult for Russia to sustain a massive troop buildup on the border for many months, given the costs involved. There are currently more than 100,000 troops near Ukraine. The official said it was possible Putin tried to turn the tensions into a frozen conflict, by keeping a guerrilla force there and provoking smaller military skirmishes.

Another official said a further increase in troops was expected in the coming weeks, hardening the view that a war remains an equally likely prospect.

Moscow has in recent years developed military structures closer to Ukraine, so deploying forces nearby isn’t as costly or as complicated as it was previously. Last April, when another massive build-up caused alarm in the west, troops left equipment behind when they scaled back their presence.

The European concerns highlight the lack of options on the table to deter Putin. NATO and the U.S. have made clear they would not send in troops in the event of a war, with the focus on diplomatic efforts and a push to design a new set of sanctions that could be deployed against Moscow. European officials have also expressed concern that Russia could retaliate by cutting off crucial gas supplies to EU nations.

The Kremlin’s support in turn for separatists in eastern Ukraine has prompted U.S. and EU sanctions that have hit Russia’s energy and financial sectors.

German Foreign Minister Annalena Baerbock on Friday stressed the need to keep going with talks. She is due early next week to travel first to Kyiv and then Moscow. That’s even as Russian Deputy Foreign Minister Sergei Ryabkov on Thursday said discussions are already at a “dead end.”

“Diplomacy, especially in times of crisis, needs a lot of perseverance and patience, and strong nerves,” Baerbock told reporters at a meeting of EU foreign ministers in Brest, France. “There were no real talks for years. Now we first have to reconnect these communication channels. For that we will, together with our European partners, use the channels in the next weeks and months, however long it may take.”

On the ground, meanwhile, the Russian military buildup is continuing, according to western officials.

Reinforcements totaling more than 10,000 combat-capable troops are on their way from the country’s far east, said Konrad Muzyka, head of the Rochan Consulting defense research group based in Gdansk, Poland.

Trucks, tanks, infantry fighting vehicles and multiple rocket launchers have been recorded in the past week on social media videos moving west from easternmost parts of Russia on trains, according to the Moscow-based Conflict Intelligence Team. Eyewitnesses report up to several trains a day, said CIT, which tracks Russian troop deployments.

The potential battle-ready force on Ukraine’s borders is almost four times the usual strength and cannot be maintained for more than a few months, Muzyka said. “We will definitely see a continuous deployment of Russian troops near the border but we still don’t know what the end will be.”