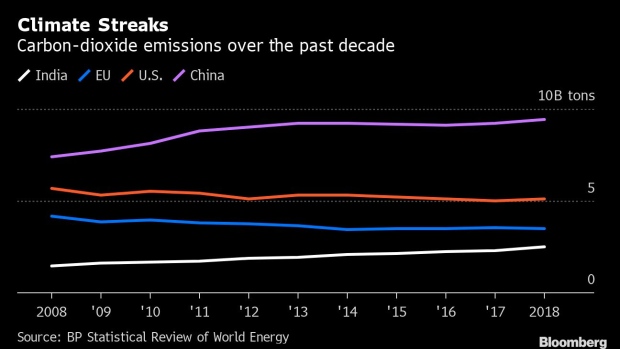 (Bloomberg) -- The European Union is gearing up for the world’s most ambitious policy against climate change -- requiring a radical overhaul of the economy -- at a summit in Brussels next week.

The bloc’s leaders will commit to cutting net greenhouse-gas emissions to zero by 2050, according to a draft joint statement for the Dec. 12-13 meeting. The EU will promise more green investment, and consider easing its ban on state subsidies for companies, and taxing imports from countries that fall short on environmental standards

“If our common goal is to be a climate-neutral continent in 2050, we have to act now,” Ursula von der Leyen, president of the European Commission, told a United Nations climate conference on Monday. “It’s a generational transition we have to go through.”

The EU plan, set to be approved as the high-profile UN summit in Madrid winds up, would put the bloc ahead of other major emitters. Countries including China, India and Japan have yet to translate voluntary pledges under the 2015 Paris climate accord into binding national measures. U.S. President Donald Trump withdrew from the Paris agreement two years ago.

The Commission, the EU’s regulatory arm, will have the job of drafting the rules that would transform the European economy once national leaders have signed off on the climate goals for 2050. The wording of their draft communique may change before next week.

To ensure that coal-reliant Poland doesn’t veto the climate goals, EU leaders want to pledge an “enabling framework” that will include financial support.

The commission has estimated that additional investment on energy and infrastructure of as much as 290 billion euros a year may be required after 2030 to meet the targets. Under the plan, the European Investment Bank will spearhead the funding. It has promised to mobilize 1 trillion euros ($1.1 trillion) over a decade.

Von der Leyen told the UN meeting that the Commission will propose an EU law in March that would “make the transition to climate neutrality irreversible.” She said the measure will extend the scope of emissions trading, and will include “a farm-to-fork strategy and a biodiversity strategy.”

The Commission chief is due to unveil more details of the plan, known as the European Green Deal, at an extraordinary session of the European Parliament on Dec. 11, a day before the leaders’ summit.

The EU leaders will also debate the bloc’s next long-term budget next week. The current proposal would commit at least $300 billion in public funds for climate initiatives between 2021 and 2027.

To contact the editors responsible for this story: Chad Thomas at cthomas16@bloomberg.net, Ben Holland