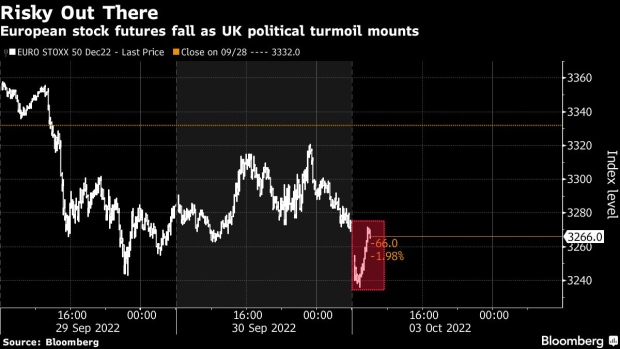 A shopper rides an escalator outside the Liverpool One shopping mall in the city centre of Liverpool, UK, on Tuesday, Sept. 27, 2022. The UK's stock and bond markets have lost at least $500 billion in combined value since Liz Truss took over as Prime Minister, with investor confidence shattered by a shock tax-cutting budget. Photographer: Anthony Devlin/Bloomberg , Bloomberg

(Bloomberg) -- European stock futures fell as the region’s energy crisis continued to escalate and investors fretted over the hawkish central banks’ impact on the economy while monitoring news about the UK government’s tax proposal.

December contracts on the Euro Stoxx 50 Index were down 1.2% by 7:38 a.m. in London after earlier falling as much as 2.4%. FTSE 100 futures also pared early losses to trade down 1% after Prime Minister Liz Truss dropped a plan to cut taxes for the highest earners just 10 days after announcing it.

The UK’s political turmoil has added to headwinds for Europe investors already grappling with the fallout of Russia’s war in Ukraine as well as global concerns tied to inflation and higher rates. The pound touched a record low against the dollar last week, while European stocks tanked and British bond yields surged. At the same time, Citigroup Inc. strategists said they would buy the dip in the FTSE 100 on cheaper valuations and a heavy international exposure.

“Bond market turmoil is shaking equity markets as investors struggle to understand the future path of growth and inflation,” said Sebastien Galy, senior macro strategist at Nordea Asset Management. “What once was the willingness to position for the end of 2023 and beyond benefiting growth stocks has shortened to the next few months and the need for risk management.”

Sanford C. Bernstein strategists Sarah McCarthy and Mark Diver also said the uncertainty around the path of bond yields over the next two years is “one of the biggest risks” to stock valuations.

Read More: Runaway Bear Market Blows Past Everything Meant to Slow It Down

Investors are also watching developments surrounding Credit Suisse Group AG after its new chief has asked investors for less than 100 days to deliver a new turnaround strategy. The cost of insuring the firm’s bonds against default climbed about 15% last week to levels not seen since 2009 as the shares touched a new record low.