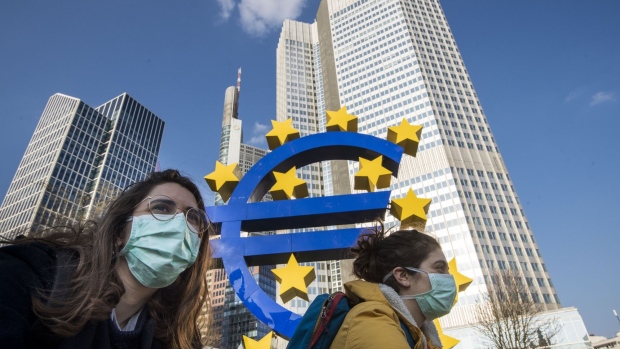 Europe is gingerly trying to get back to business, with restrictions loosening across the continent as the spread of the coronavirus slows.

The German Spy Museum in Berlin opened its doors for the first time in weeks, and bars in central Rome began offering takeaway services. In Vienna, shaggy-haired Austrians flocked to barbers’ shops when they reopened on Saturday and students with final-year exams are returning to school.

With Italy, Spain, Greece, Portugal and Germany all relaxing some of their restrictions on Monday, Europe is settling down to a new normal as it returns to public life. But it’s slower and less dynamic than before and some restrictions will remain in place for weeks or even months.

While the move will ease pressure on economies, the partial reopening means it’s still far from business as usual. Under a “mild” scenario published by the European Central Bank on Friday, the euro-area economy will shrink 5% this year. More severe potential outcomes point to contractions of 8% and 12% respectively and output may not reach pre-pandemic levels until the end of 2022.

“We will be lucky if we earn a quarter of what we used to,” Stefano Capuzzi said during a short break from serving customers at the Trastevere Bar near the banks of the River Tiber in Rome. Having a coffee means enjoying a quick chat, “not running away with a hot plastic cup,” said the 42-year-old bartender, who nevertheless had sold more than 100 espressos and dozens of pastries in the early morning rush.

After more than 120,000 deaths in Europe, leaders are being careful in opening the economy amid concerns that a new spike in infections will make the crisis longer and deeper.

For now, the data is increasingly reassuring. Germany reported the lowest number of new infections and deaths since at least March 30, and Spain’s daily fatalities and new cases hovered at lows last seen before restrictions were introduced in early March.

Austrian Chancellor Sebastian Kurz told Swiss daily newspaper Blick that a second wave is “a realistic scenario” and that the key question is “whether infections can be kept in check regionally and isolate patients quickly.”

In Portugal, citizens are finally getting their hair cut as well, with barbers allowed to reopen along with small shops, bookstores and car dealerships. Malls and the largest stores will have to wait until June 1, while restaurants can start serving again on May 18 with capacity limited to 50 per cent. The use of masks is required on public transport and in shops.

Several museums in the German capital are working out how they can minimize the health risks when opening up again. State-run museums including the Neues Museum, home to the famed Nefertiti ancient Egyptian bust, remain closed for now but a Dali exhibit near Potsdamer Platz and the East Germany-themed DDR Museum near Alexanderplatz opened Monday for the first time since mid-March.

The Spy Museum was handing out free pens to attendees -- not for taking notes on the artifacts of Cold War espionage like lipstick cameras and decoding machines -- but to reduce the risk of spreading germs when operating touchscreens. Alongside time-slot tickets and glass barriers in front of ticketing personnel, the measures were some of the numerous ways, large and small, in which the pandemic is changing European life.