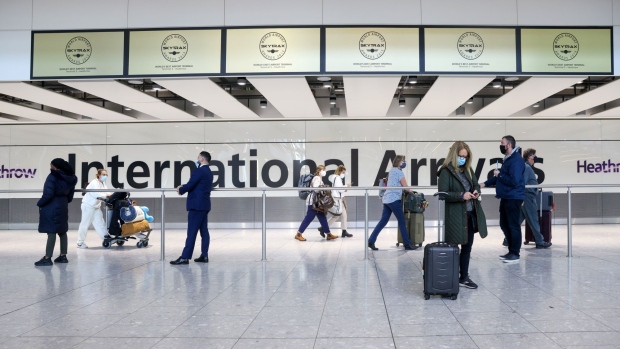 Countries across Europe and the Middle East are investigating suspected cases of the new variant first announced in South Africa. The Netherlands is researching more than 60 new Covid infections, and Israel reported three omicron cases from people who hadn’t been abroad.

The reports come as governments from the U.S. to Australia tighten restrictions on travel to southern Africa. The U.S. upgraded its travel advisories to warnings, and the U.K. is adding four more nations to its “red list.” In the aftermath, South Africa may announce more stringent lockdown measures to curb the variant’s spread. At the same time, European countries are also doubling down on requirements for travelers arriving from the U.K., one of the first nations to spot the new variant.

Czech public television on Saturday reported the country’s first omicron infection, detected with 90% likelihood in a vaccinated person who is experiencing mild symptoms after returning from Namibia via South Africa and Dubai. Earlier this week, the Czech government tightened social-distancing measures to stem a record spike in Covid-19 cases, but refrained from declaring sweeping lockdowns like those in Austria and Slovakia.

Denmark has probably registered its two first cases of the new variant. The cases were registered in passengers traveling from South Africa to Denmark, Health Minister Magnus Heunicke said in a tweet on Saturday. The two cases need to be confirmed through a second test, the health ministry said in a statement.

U.S. Secretary of State Antony Blinken praised South African scientists for quickly identifying the latest Covid-19 virus variant and the country’s government for “its transparency in sharing this information.”

Blinken made the comments in a phone call Saturday with South African Foreign Minister Naledi Pandor. During the conversation, both diplomats emphasized the need for cooperation to vaccinate more people in Africa, State Department spokesman Ned Price said in a statement.

Europe is tightening its own travel restrictions as suspected omicron cases rapidly emerge. Starting on Saturday, Switzerland required passengers coming from the U.K. to show proof of vaccination and negative Covid-19 tests upon arrival. Beginning on Dec. 1, Spain will also only begin allowing vaccinated travelers arriving from the country.

Meanwhile, Austria registered its first suspected case of a person infected with the omicron variant of the virus. Authorities in Tyrol, in the border with Germany, said the fully-vaccinated patient had traveled back from South Africa three days ago and wasn’t showing any symptoms.

In Australia, urgent genomic testing is underway after two passengers who arrived in Sydney from southern Africa on Saturday tested positive for Covid-19.

Israel has three new suspected cases of the omicron variant from people who didn’t travel abroad recently, according to the country’s health ministry. Another four people were suspected but they returned from abroad.

Of the seven in total, three were classified as vaccinated. Israel already has a confirmed case from someone who recently traveled from Malawi.

Italy’s National Health Institute said it identified a possible case of the omicron variant from a patient from Mozambique who had the coronavirus.

The subject and his family who reside in the Campania region of Italy, are in “good health condition,” according to a statement.

Prime Minister Boris Johnson said all close contacts of any positive omicron case must self-isolate for 10 days regardless of their vaccine status, and ordered masks to be worn in stores, certain indoor settings and on public transport.

The measures, which exclude hospitality venues, will be reviewed in three weeks, Johnson said at a press briefing.

“We don’t know how effective our vaccines will be” against the new variant, he said. “But we have good reasons to believe they will provide at least some measure of protection.”

“I would not be surprised if it is,” Fauci said on NBC’s “Weekend Today” Saturday. “We have not detected yet,” but when a virus shows “this degree of transmissibility” it “almost invariably, ultimately, is going to go essentially all over,” he said.

While it’s “conceivable” the latest variant may diminish vaccine protection against Covid-19, existing vaccinations may be able to contain it, Fauci said.

British Airways will temporarily suspend passenger flights to and from Hong Kong starting Sunday due to staff shortages after at least one employee tested positive for Covid, the South China Morning Post reported.

IAG SA’s flagship British airline took the decision after most of the staff on a flight that arrived Saturday were taken to a quarantine center on Lantau Island, according to two people that the SCMP didn’t identify. Flights are scheduled to resume Dec. 4, according to availability on the airline’s website.

The State Department is warning Americans not to travel to eight African nations as the new coronavirus variant spreads. Advisories concerning South Africa and seven other countries were upgraded Saturday to Level 4 -- the highest possible.

President Joe Biden’s administration will restrict travel to and from the countries starting Monday as a “precautionary measure,” he said in a statement. The policy doesn’t apply to citizens and lawful permanent residents, though they must still test negative prior to travel to the U.S.

South Africa may announce more stringent lockdown measures in coming days to curb a resurgence of coronavirus infections and the spread of a new variant, people familiar with the matter said.

The National Coronavirus Command Council met Saturday to discuss possible measures, while weighing the impact any moves will have on the economy, said the people, who asked not to be identified because the talks aren’t public. Among the options being considered are ways to try and boost the nation’s vaccination rate, they said.

The U.K has confirmed two cases of the new Covid-19 strain omicron. “The two cases are linked and there is a connection with travel to southern Africa,” Health Minister Sajid Javid said on Twitter.

The individuals and their households -- one in Chelmsford and one in Nottingham -- are self-isolating and contact tracing is ongoing, according to the U.K. Health Security Agency.

English rugby’s ruling body called off a men’s match between the Barbarians and Samoa, due to be held Saturday at Twickenham stadium outside London, because of six confirmed Covid cases among the Barbarians team.

Four players and two of the staff have contracted the virus, according to a statement from the Rugby Football Union.

The German National Academy of Science Leopoldina is urging the government to implement stringent contact restrictions immediately for a few weeks to combat the pandemic and address the Omicron variant.

These bans must also cover vaccinated people and those who recovered from an infection. The government also must make vaccination mandatory over the coming months, the academy said in a statement on its website.

A proposal to clear the record backlog of National Health Service waiting lists fueled by the coronavirus pandemic is expected to fall short of detailed targets, according to the Financial Times.

Health leaders have resisted publicly stating yearly goals until 2025 -- the date set by U.K. Prime Minister Boris Johnson to treat about 30% more elective patients -- due to the uncertain outlook, the paper reports, citing two people familiar with the development of the plan. The proposal is set to be published within days.

Goldman Sachs Group Inc. is rolling out a reimbursement plan to help compensate employees in the Asia-Pacific region for costs incurred from hotel quarantine stays as Hong Kong’s strict Covid-Zero strategy makes it harder for global banks to retain top talent there.

Goldman staff will be able to claim a one-time subsidy of as much as $5,000 to cover costs from a mandatory quarantine stay effective Dec. 1, according to a memo seen by Bloomberg. A stay at Hong Kong’s designated quarantine hotel can cost HK$500 ($64) to HK$3,630 a night for a non-suite room.

French Health Minister Olivier Veran said 3 million appointments have been made for Covid booster shots since he announced they would be made available to all adults.

France is opening up boosters to all those age 18 and above starting Saturday, with 19 million people now eligible for an additional shot. About 6.3 million people already have had a booster.

A majority of Austrians support government plans to make vaccinations against the coronavirus mandatory. The country’s vaccination rate is one of the lowest in western Europe.

A combined 60% of respondents saw the government’s recent step as “absolutely right” or “rather right” in a survey conducted by the Unique Research institute for the Profil magazine. That compares with 36% who saw the policy as absolutely or rather wrong.

A traveler returning from South Africa on Friday night showed several symptoms typical of the new variant, Kai Klose, minister of social affairs in the German state of Hesse, said on Twitter without providing more detail.

While the virus sample hasn’t been sequenced, there’s a “high level of suspicion” that the person has the new strain, Klose said. The traveler has been isolated at home.

Prime Minister Narendra Modi asked Indian officials to review plans for the easing of international travel restrictions after the emergence of the new omicron variant. India needs to be “proactive in light of the new variant,” Modi said during a meeting on the Covid-19 situation and the pace of vaccinations in the country.

On Friday, the Press Trust of India cited the civil aviation ministry as saying scheduled international flights to and from India will resume starting Dec. 15.