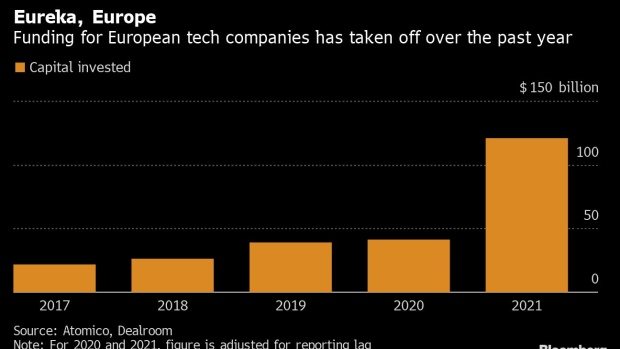 (Bloomberg) -- Europe’s technology sector is set to bring in more than $100 billion of annual investment for the first time this year, capping off a period of deal-making and surging valuations.

With nearly three times as much capital projected to be raised this year compared with 2020, the total number of tech companies in Europe valued at more than $1 billion now exceeds 320, according to data compiled by London-based venture capital firm Atomico.

After continually trailing the U.S., Europe’s tech companies have been increasingly attracting investors with lower valuations and startups working in areas such as finance and ecommerce.

Investment firms such as Sequoia Capital and Coatue Management have either established or plan to start European outposts, signaling a further influx of money ahead.

When it comes to early-stage funding, Europe has now reached parity with American peers: Over the past year, European startups accounted for 33% of all capital invested globally in fund-raising rounds of as much as $5 million, compared to 35% for the U.S., according to the report.

“This has been a watershed year for the European tech ecosystem,” said Tom Wehmeier, an Atomico partner who co-authored the State of European Tech report, published Tuesday.