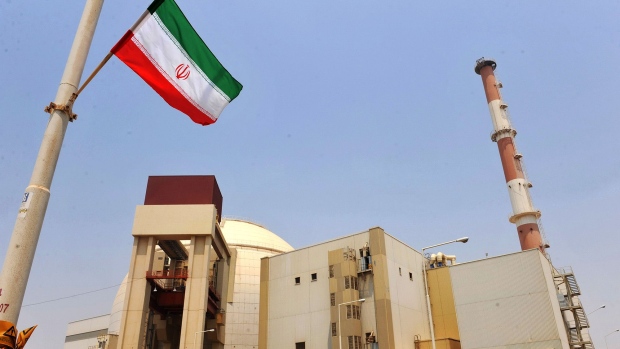 (Bloomberg) -- European nations insist they still want to save the Iran nuclear deal, but to do that they now need to turn up the pressure on Tehran.

Germany, France and the U.K. triggered a dramatic escalation in the standoff with Iran on Tuesday, starting formal action against the Islamic Republic for breaching restrictions on uranium enrichment set out in the 2015 accord.

Violating the terms of the deal marks a dangerous new course that could see Iran coming closer to developing a nuclear weapon and leaves the so-called EU-3 with little choice but to start the agreement’s dispute resolution mechanism, according to European Union diplomats who spoke on condition of anonymity.

The three European signatories of the deal have been struggling to hold it together since President Donald Trump pulled the U.S. out 20 months ago. But rather than buckle under pressure from Washington and finish off the accord -- a process that could ultimately lead to tougher sanctions on Iran, including on weapons imports -- EU governments are calling Tehran’s bluff in an effort to force open a new diplomatic front that could salvage the deal, the diplomats said.

And the timing couldn’t be more delicate.

The U.S. and Iran were on the brink of war less that two weeks ago after Trump ordered the killing of top Iranian general Qassem Soleimani. As Iranian forces launched retaliatory attacks on U.S. facilities in the Middle East, they accidentally shot down a Ukrainian airliner over Tehran, triggering protests against the regime.

“We’re calling on Iran to participate in this process constructively,” German Foreign Minister Heiko Maas told reporters in Berlin. “The goal of these negotiations will be to preserve the nuclear accord.”

The move opens a new phase for the European leaders who have been keeping the nuclear deal on life support.

While Trump campaigned in 2016 on a pledge to dismantle the pact negotiated under his predecessor Barack Obama, the European allies have viewed it as an anchor for global efforts to prevent nuclear proliferation.

The Europeans have been building up to Tuesday’s decision since December when foreign ministers dispatched their top lieutenants to China and Russia -- the two other signatories -- to seek consensus on triggering the dispute mechanism, but found little support. The decision was made public following Iran’s announcement on Jan. 5 that it would no longer be bound by the terms of the deal.

The resolution mechanism involves a complex series of steps that could ultimately bring the accord to an end if Iran refuses to return to compliance. But there’s nothing automatic about the process and politicians can intervene along the way can to prevent the deal collapsing.

The European nations aim to use an extended open-ended window allowed by the mechanism to push for a diplomatic resolution, the officials said.

The EU will first try to resolve Iran’s nuclear violations within an initial 15-day period set out in the accord. If that fails, the foreign ministers of signatory nations, including China and Russia, would gather to debate the matter and would have the option of sending Iran back to the UN Security Council to face even stiffer international sanctions.

Along the way, the unity among the Europeans over Iran will also be tested.

U.K. Prime Minister Boris Johnson alarmed allies when he told the BBC on Tuesday that the U.S. sees “many, many faults” in the deal and that “if we are going to get rid of it, let’s replace it and let’s replace it with the Trump deal.”

The comments, possibly an attempt to assuage the U.S. president as Johnson prepares to lead Britain out of the EU, were not welcomed in other capitals, one European diplomat said. Johnson’s top foreign secretary, Dominic Raab, rowed back somewhat later Tuesday, insisting that triggering the mechanism was a tactic intended to save the deal.

“We do so with a view to bringing Iran back into full compliance,” Raab told the House of Commons in London.

--With assistance from Arne Delfs.

To contact the editors responsible for this story: Ben Sills at bsills@bloomberg.net, Thomas Penny