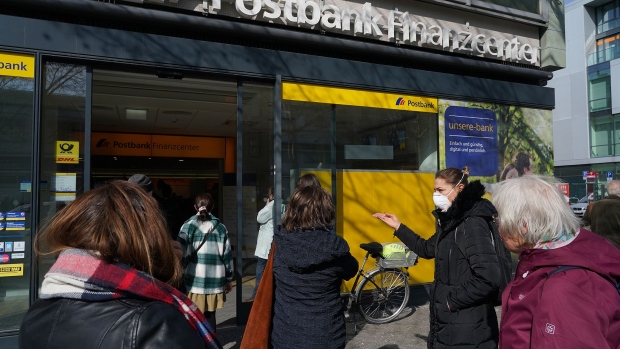 BERLIN, GERMANY - MARCH 18: People, including one woman wearing a protective face mask against the coronavirus, wait to enter a branch of bank Postbank on March 18 in Berlin, Germany. Everyday life in Germany has become fundamentally altered as authorities tighten measures to stem the spread of the coronavirus. Public venues such as bars, clubs, museums, cinemas, schools, daycare centers and non-essential shops have closed. Many businesses are resorting to home office work for their employees. And travel across the border to most neighboring countries is severely restricted. (Photo by Sean Gallup/Getty Images) , Photographer: Sean Gallup/Getty Images Europe

European authorities are considering more relief for banks dealing with bad loans because of the coronavirus, adding to recent measures that allow them to tap capital reserves and limit provisions for loan losses.

One option under review is temporarily suspending a portion of accounting rules known as IFRS 9, which were introduced in 2018 and forced banks to book losses on doubtful loans at an earlier stage than before, according to a joint document by European Union regulators seen by Bloomberg. The European Central Bank last week assured banks that it will be flexible in enforcing the existing regulations.

European authorities have sought to step in early to aid the banking sector, allowing lenders to put some of their financial cushions to work and saying they can fully benefit from guarantees and payment holidays put in place by public authorities to counter the current crisis. The ECB also announced measures to support lending to small and medium-sized enterprises.

Despite the unprecedented measures governments have already taken to protect banks and other businesses, the economic fallout from the disease could “result in a significant share of banks’ exposures being classified as non-performing,” according to the document.

While a temporary suspension of accounting rules would provide some short-term relief, it could also cause investors to lose confidence in European banks if it is seen as concealing the actual risk on bank balance sheets, according to the document, which was prepared by the European Commission, the ECB, the European Banking Authority and European Securities and Markets Authority.

Another possibility under consideration is the extension of a transition period that was agreed before IFRS 9 took effect in 2018. That could limit any volatility in banks’ capital levels and leave them with more space before automatic restrictions on shareholder payouts are triggered, according to the document.

The EBA and ESMA on Wednesday both tried to address concerns about the accounting framework in the context of the virus outbreak by providing guidance to firms. ESMA said the rules provide “sufficient flexibility” to reflect the current situation.

EU officials are due to further discuss the different options this week, according to a person close to the talks. Asked about the document, an EU commission official said discussions are ongoing on how to best provide operational relief to banks within the existing framework.