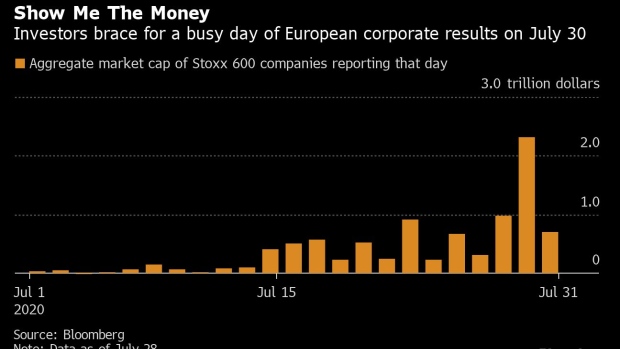 A worker works on his laptop in his kitchen whilst working from home in Danbury, U.K., on Tuesday, April 7, 2020. Among the decisions that my need to be made in U.K. Prime Minister Boris Johnson's absence are whether and when to tighten, extend or lift the current lockdown, which has seen all bars, restaurants and all non-essential shops closed, and people urged to work from home where they can. Photographer: Bloomberg/Bloomberg , Photographer: Bloomberg/Bloomberg

Investors and analysts are preparing for the busiest day so far this year for European corporate results when firms worth more than $2 trillion report their latest figures on Thursday. This time, many will still be working from kitchen tables, living-room desks and home offices.

Not only are the firms numerous, with more than 60 companies in the Stoxx 600 Index set to report, they are also large: their combined market value amounts to nearly a quarter of the benchmark. That’s more than three times the market value of April 30, the busiest earnings day of the previous reporting period, according to data compiled by Bloomberg. Nestle SA, AstraZeneca Plc and Royal Dutch Shell Plc are the headliners.

“It’s like a tsunami,” Michael Hewson, chief market analyst at CMC Markets UK Plc, said by phone. “It’s an easy way for companies to bury news and I’ve only got one set of eyes, especially when there’s also macroeconomic data to look at.”

While the last Thursday in July is traditionally a hectic day for corporate earnings, analyzing the numbers is complicated by the coronavirus pandemic and associated lockdown measures that have roiled businesses and supply chains globally. German gross domestic product and Spanish inflation are further data points that market watchers need to keep eye on that morning. Second-quarter results have so far been broadly positive compared to analysts’ low expectations, particularly after the first quarter was marked by several firms pulling forecasts and suspending dividend payments.

Equity analysts at money manager J. Stern & Co. in London have held more than a hundred virtual meetings with companies and industry experts in the last few months to gauge the impact of the pandemic, according to Katerina Kosmopoulou, a London-based partner who’s currently working remotely from Innsbruck, Austria.

The hour gained by not having to commute is an extra hour spent working, Kosmopoulou said, given the massive amount of information to plow through. Communication has also been adapted to the remote environment. Rather than the ad hoc face-to-face chats that used to occur at someone’s desk, J. Stern’s investment team now get on a daily call to share information.

“If everyone is in an office, people get distracted by all sorts of meetings that are in the calendar,” Kosmopoulou said. “Whereas if everyone is working remotely, everyone’s committed to that daily call.”

For some, remote communication cannot replace face-to-face. Sanford C. Bernstein analyst Richard Clarke misses talking to his team in person, as well as being able to physically look at the company’s management in the eye. “It’s easier for them to not answer the question when you’re over the phone rather than in person,” he said.

Still, there are some advantages to working from home during earnings season, according to Clarke, who covers hotels, leisure and catering companies based in Europe and the U.S.

“Given the huge spread of times over which earnings are released, working from home makes it a little easier to deal with,” Clarke said by phone. “When some of our companies report at 6 a.m., it’s more pleasant being able to do it in your pajamas having gotten up 10 minutes earlier rather than braving the commute or being flown to Paris for a company meeting.”