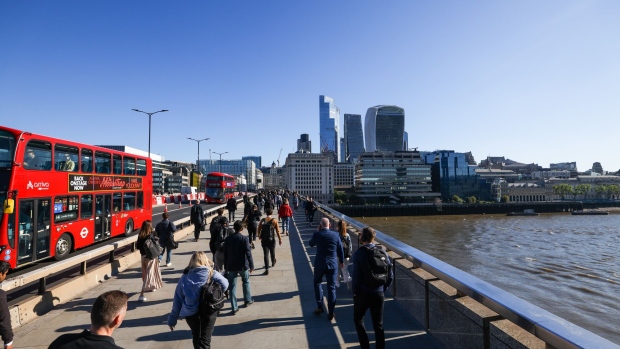 Commuters walk across London Bridge towards the City of London square mile financial district in London, U.K., on Thursday, May 27, 2021. More than half of workers in London's financial districts may now be traveling back into the office, the most since lockdown measures began easing in the U.K., according to rising sales of tuna baguettes and lattes. Bloomberg , Bloomberg

Lobbying groups for European banks, investment managers and hedge funds have called on the European Commission to extend their access to London’s clearinghouses, warning of significant market disruption.

A temporary post-Brexit waiver that allows banks and money managers in the European Union to clear trades in the U.K. expires in June. The EU has been pushing for more financial activity to move into the bloc and is yet to decide whether to keep this access in place.

“We respectfully request the commission to provide clarity as soon as possible and well in advance of March 2022 in order to prevent negative financial, commercial, operational and level playing field effects,” said the Sept. 16 letter to EU Commissioner Mairead McGuinness, which was signed by trade groups including the International Swaps and Derivatives Association, the Association for Financial Markets in Europe and the European Banking Federation.

If the current decision is allowed to lapse “there is a significant risk of market disruption for EU clearing members and their clients,” the trade associations said.

A Commission spokesperson declined to comment on the letter.

Clearing is a key part of the finance world supporting banking, technology and legal jobs across the City of London. Clearinghouses such as the London Stock Exchange Group Plc’s LCH operate at the center of markets, collecting collateral from both sides of a trade to ensure a default on one doesn’t spread panic through financial markets.

Firms prefer to use one clearinghouse for their trades because it is cheaper to consolidate and offset positions in multiple currencies and types of products.

The battle over clearing has loomed over the post-Brexit landscape since it became clear the EU and U.K. were unlikely to reach a broad agreement over financial services. Bank of England Governor Andrew Bailey issued a fresh broadside this week, warning any upheaval posed a “real threat” to financial stability.