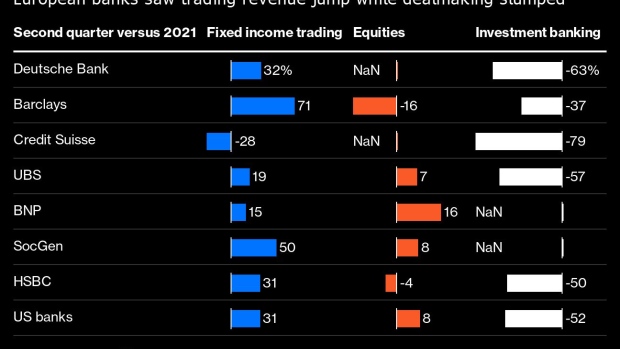 Sunlight reflects off the Deutsche Bank AG twin tower headquarters, right, as it stands beside the Frankfurter Sparkasse Tower, center, and Tower 185 on the financial district skyline in Frankfurt, Germany, on Wednesday, Sept. 2, 2020. Partly thanks to the government’s stimulus program, German activity has staged a strong rebound after collapsing in the second quarter, and companies have turned slightly more optimistic that it will continue to accelerate into next year. Photographer: Alex Kraus/Bloomberg , Bloomberg

(Bloomberg) -- European banks had one of their best quarters of the last decade, as rising interest rates and market volatility bolstered lending and trading without yet driving up bad loans.

In a quarter marked by record inflation and fallout from Russia’s invasion of Ukraine, 15 of the region’s top 20 lenders beat analysts’ profit estimates, supported by higher net interest income and debt trading. The 10-largest listed banks in the European Union posted a combined profit of 13.9 billion euros ($14.2 billion), the third-best of the last ten years.

The firms benefited as anticipation of the European Central Bank’s first rate hike since 2011 started to drive up lending margins and prompted clients to hedge trading positions, while loan books remained resilient. Yet with inflation starting to erode profits at companies, rising rates making it harder for borrowers to pay their debts, and dwindling supplies of Russian gas threatening the economy, several lenders warned that fortunate constellation may not last.

Here are some of the key takeaways from the second-quarter earnings reports of European banks:

Like their US peers, Europe’s investment banks benefited from elevated foreign exchange and interest rates trading, as investors and companies contended with tighter monetary policy and the dollar’s strength.

“The demand for positioning on the financial institutions side or hedging on the corporate side has soared,” Slawomir Krupa, the head of Societe Generale SA’s investment bank, said in a Bloomberg TV interview on Wednesday. “You obviously had the impact of the war in Ukraine which really threw some oil on a fire which was already there in terms of inflation.”

The trading businesses made up for weakness in advising on deals and capital raisings, which was muted because of the uncertain economic outlook. Global banks also marked down the value of buyout loans by almost $2 billion. Some bankers including Deutsche Bank AG Chief Financial Officer James von Moltke have suggested the trading flurry is slowing, potentially leaving investment banks with less revenue to cushion blows.

Several European banks charged more interest on loans in the quarter in anticipation of the ECB’s interest rate increase. The central bank’s first hike in 11 years was larger than many economists had expected and marks an end to eight years of negative interest rates that eroded bank profitability.

Lenders in countries like Spain are able to profit sooner because they have floating rate mortgages. Firms like Banco Bilbao Vizcaya Argentaria SA which have large operations outside Europe also benefited from earlier rate increases in other jurisdictions. Other banks have flagged gains later this year.

“We are geared to rising interest rates,” ING Groep NV finance chief Tanate Phutrakul told analysts on Thursday. “In markets like Poland, Romania and Australia you see the benefits of that liability replication in our results already. Where you will see it later in the quarters to come is more in the eurozone, where the discount rate has just been moved in July.”

Yet lenders aren’t immune to the pressures that gave their earnings a boost. Inflation is adding to wage demands, whether for branch staff or investment bankers. Following a bruising war for talent last year, Deutsche Bank increased compensation expenses in the quarter and scrapped its key efficiency goal for 2022. Banco Santander SA saw its overall costs rise from a year earlier in part because of higher salaries for employees in Brazil.

Provisions for soured loans fell in the quarter as banks argued that they’d built reserves for fallout from Russia’s invasion of Ukraine earlier in the year. Still, the hit to borrowers from a cut-off in Russian gas supplies is a threat to banking profits. Germany’s Commerzbank AG warned on Wednesday that the country would face a recession similar to the contraction seen after the 2008 financial crisis in that scenario.

Despite the turmoil, Russia was an unexpected bright spot in some banks’ earnings this quarter. The ruble’s appreciation boosted Raiffeisen Bank International AG’s loan book and profits in the country and the market was UniCredit SpA’s best-performing regional division. The banks have said they’re looking at options for their Russian units, yet the results add to the dilemma on whether to exit or keep the operations.