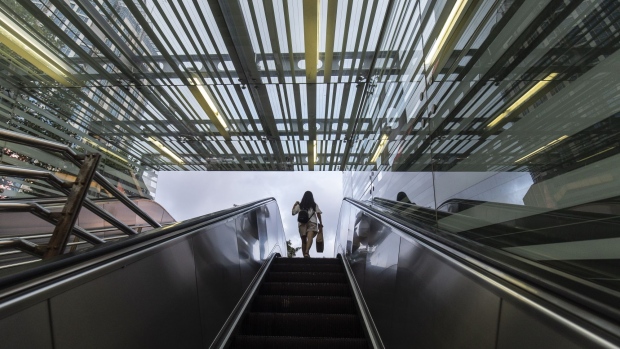 A pedestrian uses an escalator in Shanghai, China, on Tuesday, July 20, 2021. Banks in China kept the benchmark loan rate unchanged, indicating that the central bank is continuing to keep policy stable despite a recent surprise move to add liquidity to the financial system. Photographer: Qilai Shen/Bloomberg , Bloomberg

(Bloomberg) -- European businesses in China urged the country to steer away from what they see as an “inward” turn of the economy to achieve self-sufficiency, which has impeded their operations and prospects.

China has stepped up control over foreign firms’ supply of technology and components to Chinese clients over national security concerns, according to a report by the European Union Chamber of Commerce in China. That’s driving European businesses to localize development and supply chains and leading to an increasingly difficult business environment, the paper said.

Beijing’s focus on building core technologies such as semiconductors domestically as part of its dual-circulation strategy could result in massive mis-allocation of resources, according to the European Chamber, which represents over 1,700 companies operating in China. A lack of further opening up and structural reform of the economy could also lead to slower innovation and growth, according to the paper, which was released Thursday.

“It’s a bit more challenging to operate in China than it was two or three years ago,” Joerg Wuttke, president of the chamber, said at a recent press conference. “We have this problem of contradiction between the self reliance that China is aiming for and the openness that it’s always talking about.”

China released a five-year plan for its economy in March, which placed a top priority on increasing spending on research and development to turn the nation into a tech superpower. The blueprint raises concerns that economic-policy making could be increasingly driven by national security concerns, according to the European Chamber, which laid out some 930 recommendations for the government in the report.

For consumer goods, authorities sees it as necessary to keep a foreign presence to maintain competition and supply. But for companies in network equipment, telecommunications and most things digital are increasingly unwelcome, the European Chamber said.

The Cyberspace Administration’s critical information infrastructure regulation released in August on the basis of the cybersecurity law is “having a considerable, negative impact” on European companies, it said.

The regulation requires European telecom equipment and service providers, as well as producers of certain software to undergo a national security review, which involves up to 12 government departments, before they can supply new equipment or services. Many companies are localizing their production and research to cope with the review, while some see the inevitable result being their exit from the market, according to the paper.

Wuttke raised the example of Swedish telecom giant Telefonaktiebolaget LM Ericsson, which won only a 2% market share in the latest bid to supply 700MHz radios for China Mobile Ltd.’s 5G network development. That was down from 11% in a previous round and came after Sweden blocked Chinese vendors Huawei Technologies Co. and ZTE Corp. from the country’s 5G roll-out.

Some European-made fire brigade equipment and health-care equipment was also banned from being sold to Chinese clients in some provinces, according to Wuttke.

“We hope this national security self-reliance will not impact innovation, but we see receding diversity,” said Wuttke, adding that “diversity matters” in driving innovation.

In another sign of the country’s rising insulation from the world, the number of foreigners living in Beijing and Shanghai plunged 28% to about 227,000 people in 2020 from a decade earlier, according to census data cited in the report.