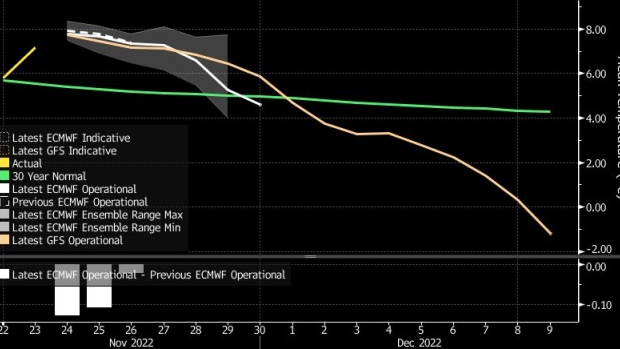 Temperatures in Berlin are expected to drop as low as -3.5 degrees on Dec. 3. Photographer: Krisztian Bocsi/Bloomberg , Bloomberg

(Bloomberg) -- After a milder-than-normal autumn in Europe, winter weather is finally arriving.

Chilly temperatures are poised to test the region’s fragile energy systems, hurt by a sharp drop in Russian gas flows and extended nuclear outages. From France to Finland, governments have warned of power shortages and rolling blackouts as demand is set to peak in the coming months.

Much of continental Europe is poised for colder weather than previously forecast for the next two weeks, according to Maxar Technologies Inc. Temperatures in Berlin are expected to drop as low as -3.5 degrees Celsius (26 Fahrenheit) on Dec. 3. Cities from Amsterdam to Helsinki and Stockholm will also fall below seasonal norms.

An unseasonably warm autumn has meant that Europe has built up robust winter gas storage levels. While currently at almost 95% full, they’ve been declining steadily for almost 10 days, according to data from Gas Infrastructure Europe.

France, Spain and Portugal will remain mild for the next few days, but the current weather pattern will by next week weaken to a cold front, according to Maxar.

Milder anomalies are expected in northern Norway and northern Sweden for the six to 10-day period, the forecaster said.

--With assistance from Elena Mazneva.