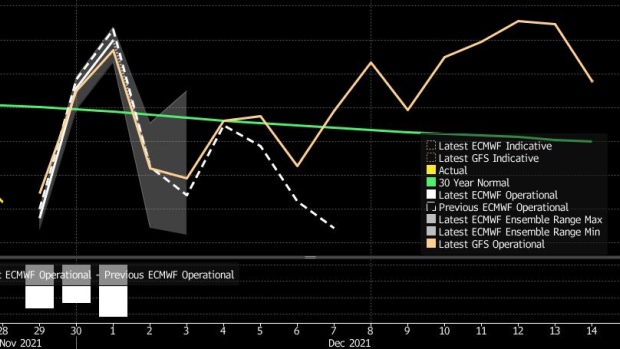 High voltage electricity power lines near the Jaenschwalde lignite-fired power station near Peitz, Germany, on Thursday, Oct. 28, 2021. The G-20 is meeting in Rome this weekend right before COP26 in Glasgow, the United Nations gathering that aims to set specific goals to wean nations off coal and other noxious substances for good. Photographer: Krisztian Bocsi/Bloomberg , Bloomberg

Energy prices in Europe surged on Monday after weather forecasts showed colder temperatures for the next two weeks that will lift demand for heating.

Benchmark Dutch natural gas for next month climbed as much as 9.7%, German month-ahead power surged 11% and carbon futures jumped to a record. Widespread below-average temperatures are seen through most of Europe for the next two weeks with the lowest levels expected in the Nordic region, according to Maxar Technologies LLC.

As winter approaches, energy markets are set to get increasingly sensitive to the prospect consumption will increase amid lower temperatures in the northern hemisphere. European gas prices have been under pressure since demand recovered during the summer and new supplies have dried up, with more liquefied natural gas diverting to Asia and Russia focusing on filling up its own storage sites.

“Given how tight the gas balance looks presently, any significant period of cold below the seasonal average would likely push forecasts for end-of-season gas inventories toward critical levels, driving prices higher,” said Stefan Ulrich, a gas analyst at BloombergNEF. “If the winter turned out to be particular cold, we could not rule out further extraordinary measures to calm the gas and by extension power markets.”

A bitterly cold blast, that moved in from the Arctic at the weekend and was still being felt on Monday, is expected to ease throughout the week. The chill is pushing up short-term power prices in Germany and France to near-record levels. Carbon for December delivery jumped to a record 75.74 euros on Ice Endex.

Benchmark Dutch gas for next month climbed as high as 96.25 euros ($105.34) a megawatt-hour on ICE Endex in Amsterdam. A series of outages in Norway are set to curb supplies.

On top of that, gas storage sites in Europe are depleting quickly. Stores are 64% full, way below the 10 years average of 86% for this time of the year.