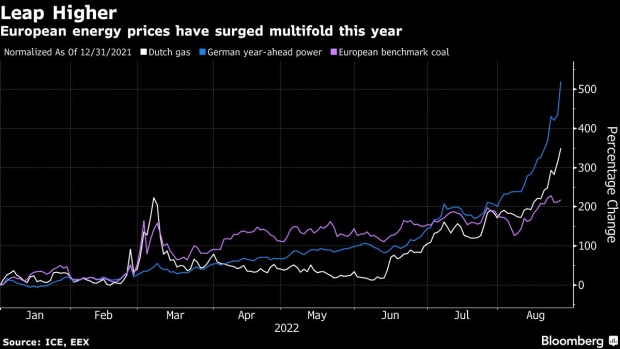 Lit stores at Les Halles shopping mall at night in Paris, France, on Thursday, July 28, 2022. Although economic expansion in France beat expectations by a distance, the European energy crisis is pushing up the cost of electricity in the wholesale market for the whole of Europe, with French forward prices surging to almost 1,000% more than their decade-long average through 2020. , Bloomberg

(Bloomberg) -- European energy extended its blistering rally as the worst supply crunch in decades heightens pressure on politicians to do more to rescue industries and households.

German and French power soared to fresh records on further nuclear reactor outages, as benchmark natural gas futures jumped as much as 11%. The fuel is near the level last seen in the early weeks of Russia’s invasion of Ukraine, when prices had hit unprecedented intraday highs.

Soaring energy costs are fueling inflation, undermining the euro currency, and disrupting factories as Russia squeezes supplies to the continent amid its six-month war on Ukraine. With Europe already heading toward recession, failure to contain the crisis threatens to spur social unrest and political upheaval if the supply crunch prompts blackouts and cold homes this winter.

The continent relies heavily on liquefied natural gas imports to fill the gap left by Russia, but competition for the fuel with Asia has intensified after a relative lull earlier this summer. Asian prices are also surging as utilities there rush to secure supplies ahead of the cold season.

European Union energy ministers may hold an emergency meeting to discuss price spikes as leaders strike a more urgent tone. Member states have already earmarked almost $280 billion to ease the price burden but that is unlikely to be enough, while more than half of UK households risk being pushed into energy poverty with bills likely to rise by roughly 80% from October.

Dutch month-ahead gas, the European benchmark, closed 10% higher at 321.41 euros per megawatt-hour, another record settlement. The contract hit an intraday high of 345 euros in early March. The UK equivalent rose 8%.

German power prices for next year surged 23% to a record 792 euros a megawatt-hour. The equivalent contract in France jumped 15% to 900 euros.

The rally is being accelerated by Electricite de France SA’s announcement that more of its reactors will take longer to come back online after halts. Coupled with tighter hydropower supplies, that means higher demand for gas in power generation.

These factors have contributed to an ever-lengthening list of casualties as costs surge for everything from zinc and aluminum production to fertilizers. Announcements on output reductions are coming almost daily, with crop-nutrient producer Yara International ASA the latest among industry majors to implement further curbs in European ammonia capacity.

Meanwhile, gas facilities in Norway are undergoing seasonal maintenance which will continue next month, while a major LNG terminal in the US, damaged by an explosion earlier this year, has delayed its restart to November.

Another big test for the market will come next week when Russia’s Gazprom PJSC halts gas flows through the key Nord Stream pipeline for three days of maintenance starting Aug. 31. European authorities are concerned that supplies may not resume after the work.

Given the price situation, Moscow’s “balance of payments is in such a strong position that, if oil prices and oil exports remain at current levels, Russia could keep gas exports to Europe at 20% of normal levels for at least three years,” analysts at Capital Economics said in a note. Russia could even afford a complete gas cut off to Europe for about a year -- if there’s a political will -- without adverse consequences for its economy, they said.

Adding to the crunch, the Kremlin’s push to consolidate control over gas is beginning to curb supply in Asia. Russia’s Sakhalin Energy LLC scrapped an LNG shipment to at least one customer in the region over payment issues, according to traders familiar with the matter.

The project’s investor, Shell Plc, which is ditching its Russian assets, may lose its long-term purchase contract with the plant, Kommersant newspaper reported Thursday, citing unidentified people familiar with the matter.