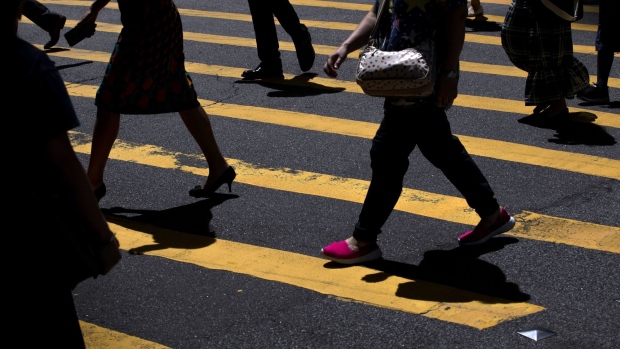 People cross a road during lunch hour in Central district in Hong Kong, China, on Wednesday, Aug. 18, 2021. Hong Kong is caught between its desire to reopen and the government's zero tolerance for any cases of Covid-19, which has kept the virus out for most of the pandemic. Photographer: Paul Yeung/Bloomberg , Bloomberg

(Bloomberg) -- European companies are discussing relocating staff from Hong Kong, the region’s local chamber of commerce said, as the city commits to a “Covid Zero” strategy that almost every country apart from China is abandoning.

Hong Kong’s strict quarantine measures have led many businesses to consider restructuring at least part of their operations to places such as Singapore, Frederik Gollob, chairman of the European Chamber of Commerce in Hong Kong, said Wednesday on Bloomberg Television.

“You can assume that in most boardrooms across Europe and Hong Kong this is a subject of discussion,” he said. “You can’t really avoid it, looking at the restrictions.”

His comments come a day after Chief Executive Carrie Lam said Hong Kong’s ties with mainland China were more important than the international business and global travel connections that helped cement the city’s status as an Asian financial center. Lam was expected to discuss her response to the coronavirus in her annual policy address Wednesday.

The EU chamber -- an umbrella group that represents countries including France, Germany and Spain -- in August issued an unprecedented open letter warning Lam that her pandemic controls threatened Hong Kong’s standing as a global finance hub. An American Camber of Commerce survey earlier this year found more than 40% of members said they might leave the city.

Despite recording no local coronavirus infections in more than a month, Hong Kong requires returning residents to spend as long as 21 days in hotel quarantine, even if they are fully vaccinated. That has frustrated foreign business chambers and residents and contributed -- alongside China’s imposition of a national security law -- to a record outflow of residents.

“What we do not see is a massive outflow of companies out of Hong Kong,” Gollob said. “But we do see the tendency to restructure either functions, parts of your teams, teams, or in some cases, entire companies to other locations in Asia.”

Still, Gollob said it was equally important for EU businesses in Hong Kong to be able to travel to mainland China, a major trading partner for the bloc. “We’re looking forward to seeing measures, which will lead to swift opening of the border, he said.