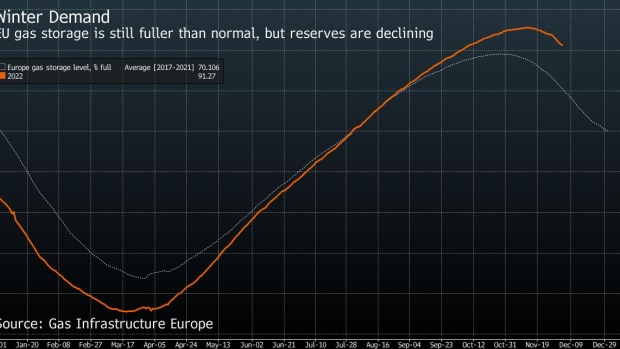 Benchmark futures increased as much 4.9% Tuesday. The cold snap in northwest Europe is putting pressure on inventories that have been built up for the winter. Still, reserves remain fuller than normal at about 91%, which together with ample supplies of liquefied natural gas is helping to keep gas prices in check.

The outlook for the next two weeks is dominated by an Arctic blast, with temperatures in the UK and Nordics dropping below freezing, according to forecaster Maxar Technologies Inc. Only Iberia and parts of southern Europe will be spared from the frigid weather.

Following a mild autumn, traders are now torn between rising heating demand and relatively comfortable supply conditions, said Ole Hansen, head of commodity strategy at Saxo Bank A/S. Yet, “given the prospect for colder-than-normal temperatures, the price of gas is likely to remain elevated in the coming weeks.”

Volumes of LNG sent from import terminals in northwest Europe into local networks hit a record high at the end of November and remain elevated, show grid data compiled by Bloomberg. But the market remains tight without normal flows from Russia, and risks remain if there are prolonged cold snaps, further supply disruptions or a sudden jump in Asian demand.

Europe is still likely to pull through this winter and the next, Engie SA Chairman Jean-Pierre Clamadieu said Tuesday. “The feeling is that we’ll manage.”

Yet, many industry watchers expect supplies to get even tighter in 2023, with JPMorgan Chase & Co. expecting Europe’s prices to average €155 with a peak of €175 in the third quarter of next year.

Meanwhile, European Union nations, racing to design a tool able to prevent further price surges, are still far apart on details — just a week to go before ministers are due to discuss the move.