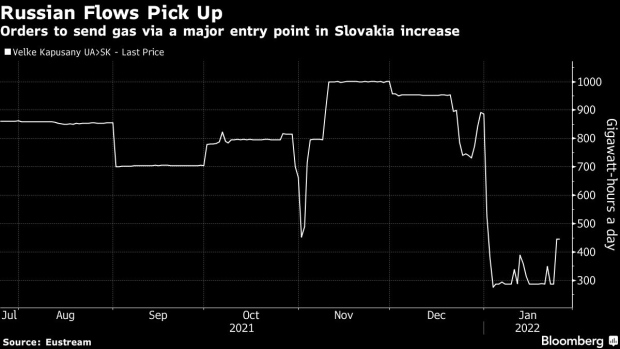 Pipework showing flow direction at the Kasimovskoye underground gas storage facility, operated by Gazprom PJSC, in Kasimov, Russia, on Wednesday, Nov. 17, 2021. Russia signaled it has little appetite for increasing the natural gas it transits through other territories to Europe as the winter heating season gets underway. Photographer: Andrey Rudakov/Bloomberg , Bloomberg

Orders to send gas through Ukraine via Velke Kapusany, a major entry point in Slovakia, increased to the highest level since Jan. 1, according to data from operator Eustream. Shipments still remain below the average. Above-average temperatures are expected across most of mainland Europe next week, Maxar said in an emailed report.