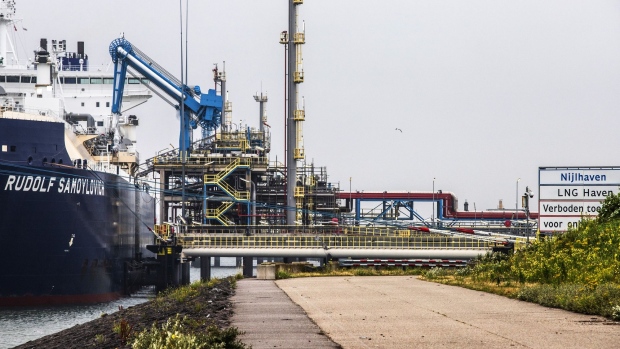 Benchmark futures fell more than 1.6%, after rising in the two previous sessions as buyers of Russian gas tried to unravel how they would keep paying for the fuel without breaching sanctions. At least 10 LNG tankers are expected to reach European ports by month-end, ship-tracking data on Bloomberg and port data show.

Europe’s gas inventories have risen to near their seasonal levels. Companies are pumping the fuel into storage to guard against any disruption in Russian supplies with the European Union giving mixed signals to buyers on Moscow’s new payment mechanism. Storages were almost 41% full on Tuesday, close to the 44% five-year average and up from 33% at the beginning of the month, according to Gas Infrastructure Europe.

The market remains wary with deadlines for payments for Russian gas fast approaching. Moscow has already cut off supplies to Poland and Bulgaria, and Finland has said there’s a “real risk” that flows will end this week as it’s refusing to pay in rubles. Some other key buyers in the region, including Eni SpA and Uniper SE, see the possibility of being compliant both with Russian demands and the sanctions law.

Meanwhile, Russian gas shipments to Europe through Ukraine are expected to edge higher on Thursday based on orders, but are still lower than usual. Supplies via Nord Stream, the biggest gas pipeline from Russia to Europe, remain stable.

Dutch front-month gas, the European benchmark, was 1.6% lower at 93 euros per megawatt-hour as of 8:25 a.m. in Amsterdam.