Even if Nord Stream 2 comes online you still have a fundamental problem with supply: Matt Marshall

European gas and power prices eased after surging to a fresh record on Tuesday even as Russia keeps shipments to Europe capped.

Russian gas flows into Germany’s Mallnow compressor station set to remain halted for a third day on Thursday, as the key Yamal-Europe pipeline is instead flowing gas eastward to Poland, according to network operator Gascade. The so-called reverse flows are likely the result of lower requests from buyers in Europe.

Russian gas flows to Europe dropped sharply this week as some buyers under long-term deals have already hit their contracted supply limits for the year, according to people with knowledge of the matter.

With the approaching Christmas holiday break, trading is thin, while the weather outlook signals a temporary return to normal and above-normal temperatures from Thursday. In addition, a flotilla of liquefied natural gas ships has set course for what is currently the world’s most lucrative market for the fuel, diverting cargoes from Asia.

Still, constrained supplies from Russia mean Europe has to rely on its already depleted storage sites, as nuclear outages in France mean more gas is needed to generate electricity. Inventories in Europe are expected to end the heating season at record-low levels, extending this year’s crunch that’s already shutting smelters and fertilizer factories. 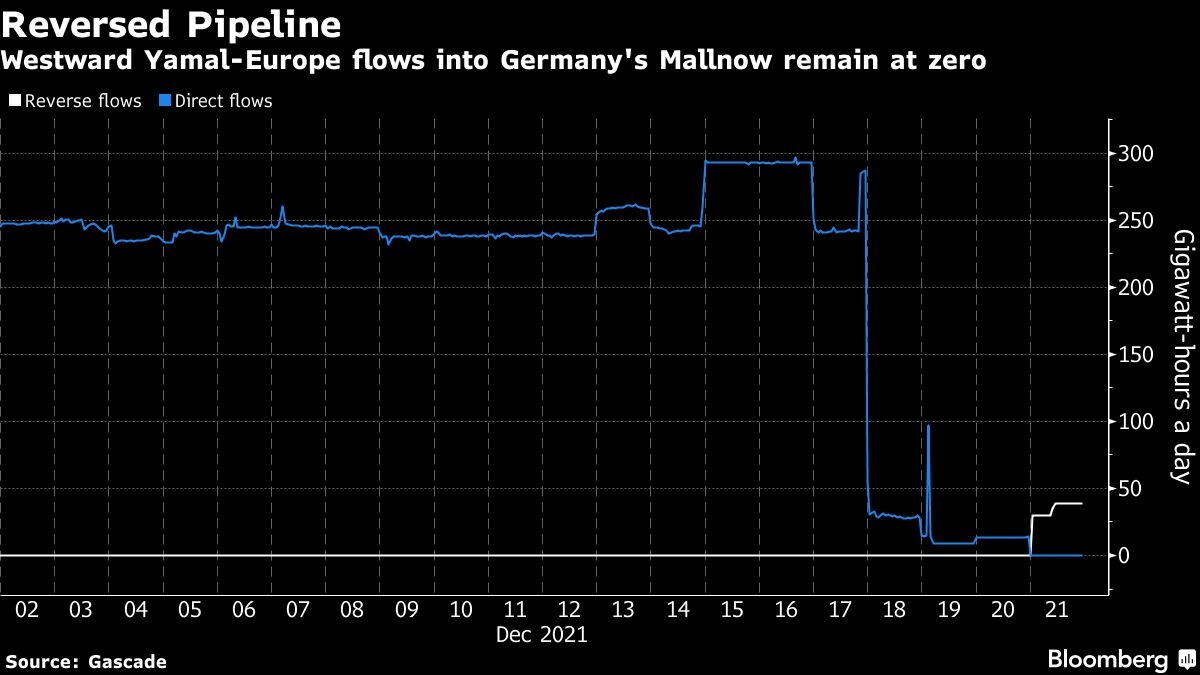 The halt to Yamal flows, heavy nuclear outages and colder-than-average weather in northwest Europe “may sustain this rally into year-end,” Goldman Sachs Group Inc. analysts including Samantha Dart said in a report. “We expect that the price spike will lead to both demand destruction and higher LNG imports from January, gradually bringing prices lower.”

The market looks likely to remain volatile. There are already signs that Russia may keep flows capped in January, with just 21 per cent of the pipeline capacity to flow gas into Mallnow next month being booked.

Goldman said the bookings disappointed its expectations for a significant increase in flows. The bank raised its forecast for January to US$45 a million British thermal units and the February projection to US$25 per mmBtu from a previous forecast of US$17.60. The Dutch January price closed at the equivalent of about US$57.43 per mmBtu Wednesday.