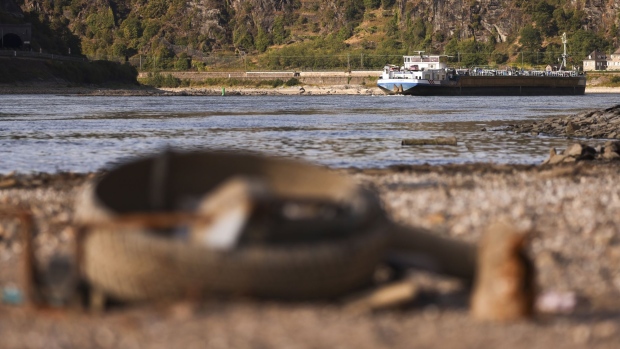 A barge passes an exposed riverbed on the River Rhine near Loreley, Germany, on Friday, Aug. 12, 2022. The Rhine River fell to a new low on Friday, further restricting the supply of vital commodities to parts of inland Europe as the continent battles with its worst energy crisis in decades. , Bloomberg

(Bloomberg) -- Natural gas prices in Europe soared as a scorching summer dries up rivers in the region, boosting energy demand in a market that is already reeling from a supply crunch.

Benchmark futures settled 6.8% higher at the highest level since early March, when prices had surged to records following Russia’s invasion of Ukraine. The energy crisis is being exacerbated by very low water levels at key waypoints on Europe’s rivers that are making it difficult for diesel, coal and other commodities to be transported through the continent. Utilities could end up using more gas as an alternative.

That could constrict the region’s efforts to reduce consumption and send more gas into storage for use in the colder months. Germany on Monday announced a levy that will add annual costs of about 500 euros ($509) for households as the government spreads the burden of Russia’s squeeze on supply.

Still, the nation has pushed ahead with replenishing its inventories, which have stayed near average levels due to higher imports of liquefied natural gas. German storage hit a refill target two weeks ahead of schedule, helping keep prices in check in recent days. But the situation remains in the balance, and any further disruption in supply or a severe winter could still result in shortages and rationing.

Last Hurrah for Oil as Europe Looks Beyond Gas for Power: BNEF

The water level at Kaub on the Rhine River dropped to the critically low level of 30 centimeters (11.8 inches) on Monday and is forecast to fluctuate just above that level as the week progresses, the latest German government data show. The Rhine is western Europe’s most important river for the transport of fuel and other industrial goods.

“Germany is heavily reliant on the river to transport coal to its power stations,” particularly now that the nation is placing more emphasis on the fossil fuel due to cuts in gas flows from Russia, Inspired Energy said in an emailed note. Prices are likely to remain supported by tight supplies, even if the Rhine crisis leads to increased shipment of energy goods by rail, it said.

Dutch front-month futures, the European benchmark, closed at 220.11 euros a megawatt-hour in Amsterdam, after rising to as high as 230 euros earlier. The UK equivalent jumped 6.8%.

Any spike in demand could further tighten the market. Shipments through the key Nord Stream pipeline remain at about 20% of capacity. The curbs have slammed Europe’s economy, hitting industrial output, driving inflation to the highest in decades and threatening to push major economies into recession. Competition for LNG cargoes is also heating up as Asia boosts purchases to stock up for the coming winter.

Gas supplies via pipeline from Algeria to Italy declined over the weekend, falling by more than a quarter from levels seen earlier this month, grid data show.

The sentiment remains “very bullish due to low flows from Russia and the increased likelihood that Nord Stream 1 will not return to normal flows anytime soon,” analysts at trading firm Energi Danmark said in a note.