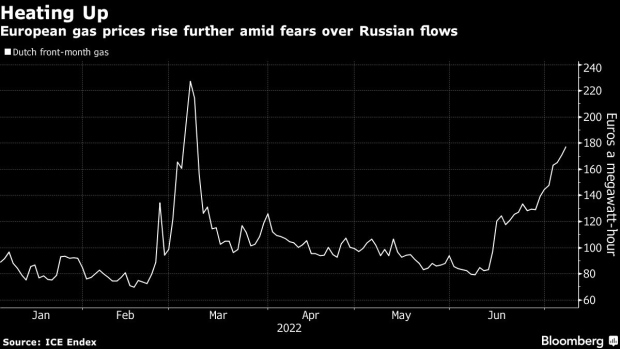 (Bloomberg) -- Natural gas in Europe headed for the longest stretch of daily gains in more than nine months as persistent fears of deeper supply cuts by Moscow spread through the market.

Benchmark futures, which have doubled their value over the past month, rose as much as 4.7% for a seventh day of increases. The crisis has also sent power prices to record highs as Russia’s tightening hold on energy supplies brings the risk that Europe may struggle to keep the heat and lights on this winter.

Nations in the region are preparing to minimize the impact of the cuts which are already squeezing utilities’ finances and contributing to surging inflation. Germany’s parliament will vote on legislation on Thursday to allow the government to curtail generation from power stations that are not deemed essential for security of supply. The nation is trying to find ways it can conserve fuel to make sure that storage is full before the heating season.

“Germany has relied for too long and too one-sidedly on energy deliveries from Russia,” German Chancellor Olaf Scholz said Wednesday, accusing Russian President Vladimir Putin of using energy exports as a political weapon following his country’s invasion of Ukraine.

The new legislation would also authorize Berlin to provide financial aid to energy companies or even bail them out, while also creating the possibility of sharing the cost of higher import prices between consumers and companies.

Dutch front-month gas, the European benchmark, traded 3.5% higher at 177 euros per megawatt-hour at 8:43 a.m. in Amsterdam.

Europe is in the middle of the biggest energy crunch in decades. The Nord Stream pipeline from Russia to Germany, the main link to the continent which is supplying at just 40% of its capacity, is set to close for annual maintenance next week. Concerns are mounting that it won’t return to full service after the works.

“The gas crisis in Europe shows little sign of abating anytime soon, and Germany is at the heart of it,” analysts at Jefferies said in a note.

The European Commission is also expected to unveil later this month more detailed contingency plans for the heating season, which may include recommendations for better long-term planning in case of tougher winters and fewer alternative sources of supply.