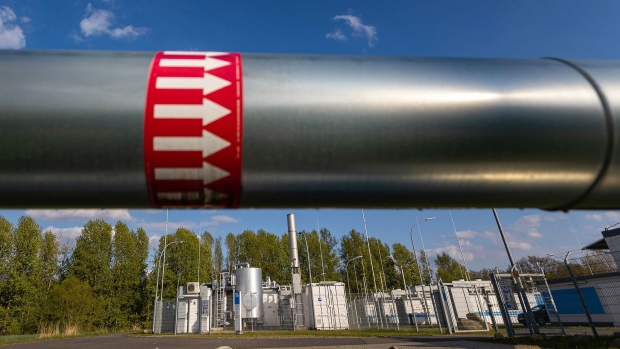 Pipework at the Falkenhagen Power-to-Gas Pilot Plant operated by Uniper NV in Falkenhagen, Germany, on Monday, May 2, 2022. The pilot plant developed by Uniper, which posted a quarterly loss as it opted to keep natural gas in storage to sell later at higher prices, converts wind power into hydrogen and synthetic methane. , Bloomberg

(Bloomberg) -- Natural gas prices in Europe edged lower after some of the continent’s key buyers said they expect to keep buying Russian gas despite mixed signals from Brussels on whether paying in rubles would breach sanctions.

Benchmark futures dropped as much as 2.3%. The European Union has issued two sets of guidance on the issue, both of which leave room for interpretation while the European Commission’s spokesman on Tuesday said opening an account in rubles to pay for Russian supplies would go beyond the EU’s recommendations.

For now, some companies including Italy’s Eni SpA and Germany’s Uniper SE have said they expect to keep buying from Russia. The bills are coming due later this month.

“It looks like any clarity of whether this payment mechanism violates sanctions is only being provided incrementally and there are still some gray areas to be ironed out,” said Kaushal Ramesh, gas and LNG analyst at Rystad Energy.

Russian gas shipments to Europe have been the focus of traders after stoppage through one cross-border entry point in Ukraine following troops activity on the ground. Transit via Ukraine is expected to edge up on Wednesday but is still lower than usual. Supplies through the  Nord Stream pipeline, the biggest link between Russia and Europe, remain stable.

Front-month gas futures were 0.7% lower at 93.50 euros per megawatt-hour as of 8:37 a.m. in Amsterdam. Carbon permits fell as much as 6.9% following the EU’s plan to sell 20 billion euros ($21 billion) of permits to help fund its plan to wean itself off Russian gas.