European natural gas and power prices plunged the most in months after Germany said its stores of the fossil fuel are filling up faster than planned.

Benchmark Dutch futures and German power slumped more than 20 per cent on Monday, paring the dizzying rally seen in the past few weeks. Gas stores in Germany are expected to be 85 per cent full next month, ahead of an October target, Economy Minister Robert Habeck said on Sunday.

While that’s welcome news for the market, the fundamental picture still looks bleak: even with full storage sites, Germany risks not being able to go through the winter if Russia halts flows to the region’s largest economy. In response, the European Union is planning urgent reform of the power market in a bid to dampen the soaring prices.

“All market participants are to some extent stunned about the fast development we have seen the last few trading days,” said Bo Palmgren, chief operating officer at MFT Energy, a Danish trader in Aarhus. “We hope that we will soon see more market liquidity and stable prices.”

In another sign of how the crisis is worsening, German energy giant Uniper SE on Monday sought to extend its credit line with the government to ensure its survival. The region’s biggest power exchange also urged nations to step up their help to beleaguered traders. 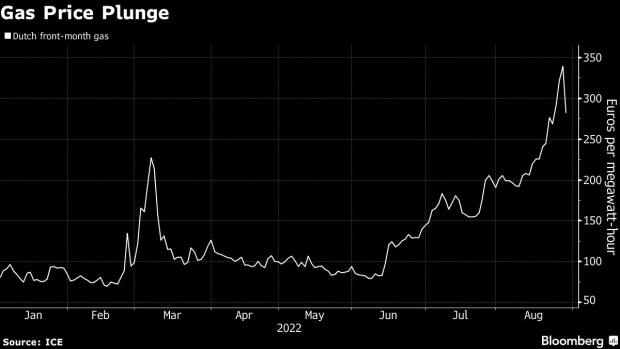 Habeck has soothed the market somewhat, but the focus will switch to whether flows resume on the Nord Stream pipeline into Germany from Russia after maintenance later in the week. Lower temperatures seen across Eastern Europe, and parts of the Iberian peninsular next week will also help nations to conserve gas as less energy will be needed for cooling.

“European gas prices have in our view overshot fundamentals fueled by a combination of supply and demand concerns and exceptionally poor liquidity in the market,” Goldman Sachs said in a report late on Friday. “Northwest European gas demand has realized above our forecast, this has been offset by higher-than-expected supply, keeping storage builds in line with our expectations.”

“The closer we get to the total filling of gas stocks -- on 27 August, EU stocks were 79 per cent full -- the more the bullish momentum will be challenged,” the market analysis unit said.

For the moment, demand destruction is gaining pace as the supply crunch is hurting industries across Europe. Fertilizer companies are being especially affected, with more than two-thirds of production capacity halted by soaring gas costs, according to Fertilizers Europe, which represents most of the continent’s producers.

The crunch has triggered increasing action to reduce consumption, with Europe targeting a 15 per cent cut in gas use this winter. European governments have started to take the drastic step of limiting energy use, such as banning outside lighting for buildings and lowering indoor heating temperatures. Germany’s economy minister proposed a reform in power markets so that prices are no longer coupled to the most expensive supplier.

Meanwhile, pipeline supplies into Europe from Norway have fallen about 20 per cent this month as planned and unplanned outages exacerbate the crunch. Competition for LNG cargoes has also increased amid restricted supplies.

The price of benchmark German power for next year slumped 29 per cent, after earlier climbing to a record 1,050 euros a megawatt-hour. The region’s power benchmarks have been setting records on an almost daily basis, with prices in Germany and France both surging more than 25 per cent on Friday.