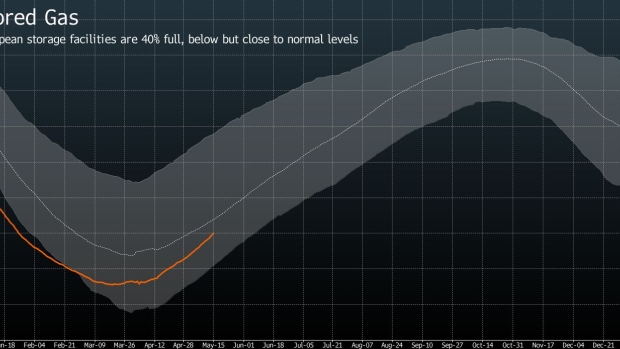 A worker installs new gas flow monitoring equipment inside a gas collect point of the Kasimovskoye underground gas storage facility, operated by Gazprom PJSC, in Kasimov, Russia, on Wednesday, Nov. 17, 2021. Russia signaled it has little appetite for increasing the natural gas it transits through other territories to Europe as the winter heating season gets underway. Photographer: Andrey Rudakov/Bloomberg , Bloomberg

The European Commission last week sent its revised guidelines to member states, noting that companies should make a clear statement that they consider their obligations fulfilled once they pay in euros or dollars, a spokesman said Monday.

The announcement eases a weeks-long standoff between the EU and Russia over energy supplies. Moscow had demanded that that payments be made in rubles, with buyers opening two accounts at Gazprombank so that a currency exchange could be made. European companies were concerned that this might violate sanctions against Russia for its invasion of Ukraine.

Russia’s natural gas shipments to Europe via Ukraine are set to remain curbed on Tuesday. However, EU imports of liquefied natural gas and warmer weather as summer approaches have also contributed to the downward price trend.

“European gas prices have shrugged off escalating geopolitical tensions,” said Biraj Borkhataria, associate director of European research at RBC Capital Markets said in a note. “Despite Russian flows taking another step down in recent weeks, record amounts of LNG imports into the continent have driven storage back to more ‘comfortable’ levels.”