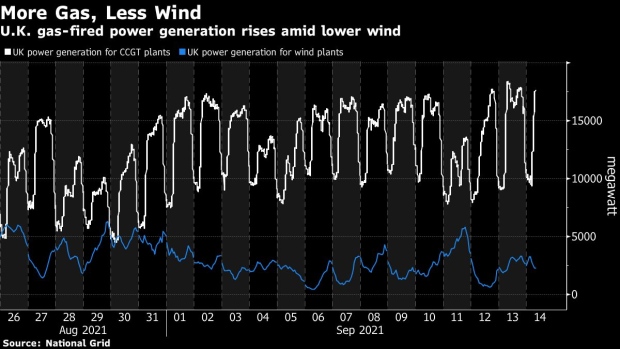 Employees cross a jetty towards the Gallina liquefied natural gas (LNG) tanker after docking at the National Grid Plc's Grain LNG plant on the Isle of Grain in Rochester, U.K., on Saturday, March 4, 2017. The shipment to England on the Gallina was priced using the U.K.'s National Balancing Point, where front-month gas cost about $7 a million British thermal units on Feb. 7. , Photographer: Bloomberg/Bloomberg

(Bloomberg) -- Natural gas prices in the U.K. and the Netherlands soared to record highs as concerns over tight supplies mount while demand increases.

Hurricane Nicholas Makes Landfall With Houston in Its Crosshairs

At the same time, Hurricane Nicholas made landfall in Texas, threatening to disrupt liquefied natural gas facilities at a time when European traders are watching for signs of cargoes diverting back to Europe amid a seasonal lull in Asia. Europe’s record-high gas prices are catching up with those in Asia, which could make it a more attractive destination for LNG cargoes.

“Competition between European and Asian buyers to attract the needed LNG cargoes seems to have started, with no known limit,” Engie EnergyScan said in a note.

Norwegian gas capacity declined to the lowest level since June amid a fresh round of maintenance at production facilities.

Benchmark European gas futures traded in the Netherlands soared as much as 7% to 65.57 euros a megawatt-hour. The U.K. contract for next-month surged as much as 6.9% to 163.81 pence a therm, a new all-time high.

Prices increased even as Russian flows via a key link to Germany gained closer to normal levels after a month and a half of lower shipments.