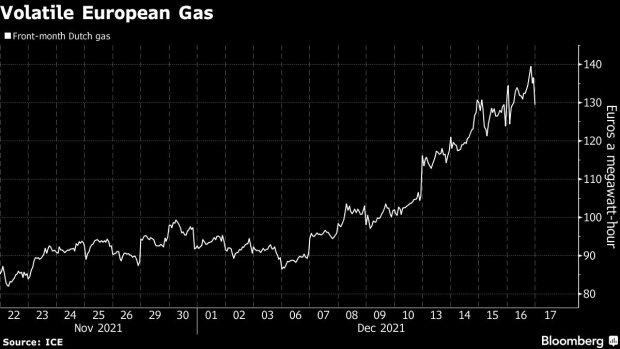 (Bloomberg) -- European natural gas prices plunged from a record close after Russia in the last minute topped up supplies to the region.

Dutch next-month futures fell more than 15% as concerns of further shortages were alleviated when the region’s biggest supplier booked about 30% of pipeline space to deliver gas from Russia toward Germany through Poland in within-day auctions. Earlier on Thursday, for the first time this month there had been no allocations at all in day-ahead auctions.

“Whatever the unknown reason for the late booking is, it very clearly highlights the problem Europe is facing with rapidly falling stocks made worse by an oncoming cold spell and nuclear outages in France,” said Ole Hansen, head of commodity strategy at Saxo Bank A/S.

Prices are still up almost 17% this week as a cold snap will hit the continent next week and storage levels are at their lowest ever for this time of year. Shipments into Germany’s Mallnow, which handles supplies from Russia via the Yamal-Europe pipeline running across Belarus and Poland, are below levels for the past two days but are within their 10-day average flows.

The below-normal temperatures are also forecast to last for a shorter time than previously predicted, now ending before Christmas, according to The Weather Co. forecasts on Bloomberg. Another bearish factor is expectation of higher LNG flows to Europe, diverting away from Asia from January.

If Russia finally decides “to turn up the taps” after keeping exports limited to long-term contract obligations, Dutch gas can quickly slump toward the 80-euro level, said Hansen.