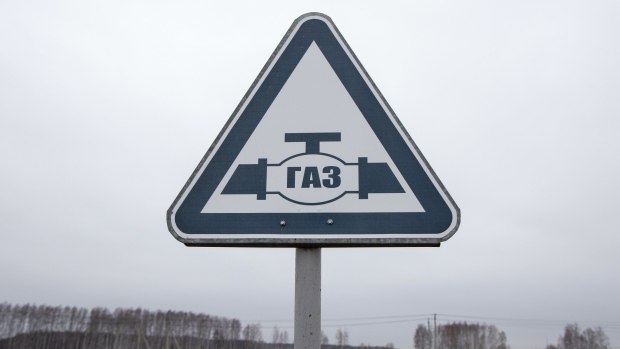 A gas pipeline marker post at the Kasimovskoye underground gas storage facility, operated by Gazprom PJSC, in Kasimov, Russia, on Wednesday, Nov. 17, 2021. Russia signaled it has little appetite for increasing the natural gas it transits through other territories to Europe as the winter heating season gets underway. Photographer: Andrey Rudakov/Bloomberg , Bloomberg

Benchmark gas futures in the Netherlands fell as much as 3% on Monday, extending Friday’s 9.2% loss. The European Commission is set to offer buyers new guidance on how to pay for gas, satisfying President Vladimir Putin’s demands while avoiding a potential breach of penalties imposed as a result of Russia’s invasion of Ukraine.

Traders have been eagerly waiting for an update of the European guidance, with most payment deadlines due by the end of the month. Russia had asked companies to accept a new transaction method that would involve opening two accounts at Gazprombank, one in euros or dollar and another in rubles.

In the new guidance, Europe plans to tell companies they should make a clear statement that they consider obligations fulfilled once they pay in euros or dollars, in line with existing contracts, according to people familiar with the matter. The bloc could also cap gas prices if Russia cuts or significantly limits shipments, according to a draft of energy-market intervention measures seen by Bloomberg News.

Russian gas flows crossing Ukraine are expected to be lower on Monday, based on shipment orders. Last week, gas shipments to Europe via the route were curtailed after a key cross-border entry point was put out of action because of troop activity on the ground. That’s helping support prices.