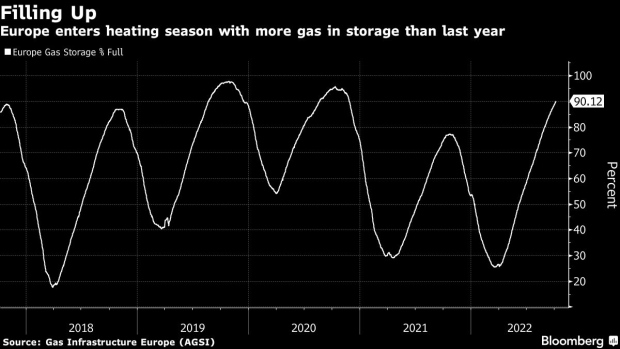 Benchmark futures lost 17% for the week, more than halving from August highs. Yet, overall energy costs for European consumers are still above historic norms, and leaders from the region continue to seek ways to ease the crisis and avoid blackouts during colder months.

The European Union’s executive arm is planning to prepare several different plans for how to cap prices by a summit later this month. German Chancellor Olaf Scholz on Friday urged the bloc to cooperate with Asian nations to bring down gas costs, although he declined to elaborate on possible mechanisms.

Meanwhile, gas storage levels on the continent are now about 90%, higher than last year. Coupled with ample supplies of liquefied natural gas and lower consumption by industries, that’s helped calm nerves for now.

Dutch front-month gas, a European benchmark, plunged 11% on Friday to 156.21 euros a megawatt-hour, the lowest since July 21. The UK equivalent dropped 12%, also posting a weekly loss.

European Commission President Ursula von der Leyen on Friday said options that could be proposed to EU leaders include negotiating a corridor for “decent prices” with reliable suppliers, a measure to curb costs within the market overall and a way to limit the influence of gas in electricity prices.

Yet, industry is concerned that price interventions may hinder both further demand destruction and supplies to Europe, at a time when it needs to replace flows that would ordinarily come from Russia.

Prices are currently being set by the demand side, according to the European Federation of Energy Traders. “Prices rise to a level where consumers self-interrupt, switch to alternative fuels, or invest in other energy saving measures,” it said. “Without this signal, consumption will be higher, and the shortfall will need to be resolved another way, e.g. mandatory curtailments.”

For now, LNG flows to Europe remain strong after prices surged well above rates in Asia, helping to divert cargoes and fill the gaps left by dwindling pipeline shipments from Russia.

Still, some nations that used to rely heavily on energy ties with Moscow may struggle this winter. That includes the biggest economy, Germany, which is already preparing for a 20% cut in gas usage this heating season. Even so, “rationing might only be avoided by hair’s breadth, both this year and next,” according to Deutsche Bank.

Next winter might be even tougher as the LNG market will get tighter, according to Morgan Stanley, which boosted price forecasts for the super-chilled fuel for the second half of 2023 and 2024. “We see a rising deficit next year,” it said.