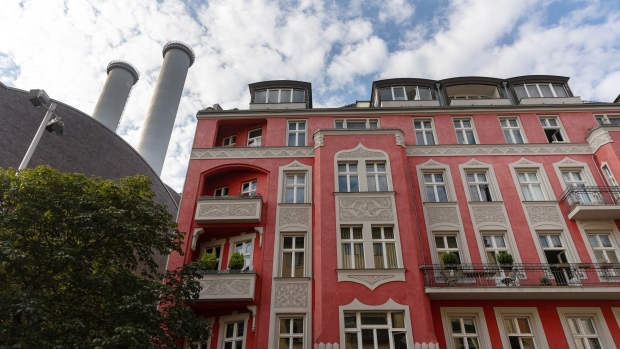 Chimney stacks at the Mitte Combined Heat and Power (CHP) natural gas power plant, operated by Vattenfall AB, behind apartment buildings in central Berlin, Germany, on Tuesday, Aug. 9. 2022. German Finance Minister Christian Lindner said he will look at ways of exempting the country's looming gas levy from sales tax in an effort to at least partially ease the burden on consumers from soaring energy costs. , Bloomberg

(Bloomberg) -- European natural gas prices surged as a climate crisis threatens to curtail energy shipments along the Rhine River and signs continue to emerge of a potentially difficult winter ahead.

Benchmark futures jumped as much as 7.85%, ending a three-session slide.

The Rhine -- northwest Europe’s most important river for the transport of industrial goods -- is set to become virtually impassable at a key waypoint in Germany on Aug. 12, due to low water levels. That could severely restrict the flow of coal, fuels and other commodities as the region grapples with a historic energy supply crunch.

Europe is rushing to stockpile gas ahead of winter amid reduced flows from key supplier Russia in the fallout from Moscow’s war in Ukraine. With just a few months left before the cold season starts to set in, the continent is trying to keep the energy crisis from spilling further into the broader economy.

“The winter outlook for power and gas supplies across Europe has become increasingly grim, with countries such as the UK now acting fast to plan for the worst,” RBC Capital Markets said in a note.

The UK is planning for several days over the winter when cold weather may combine with gas shortages, leading to organized blackouts for industry and even households. Cities across Germany are cutting back on lighting and hot water in a bid to avert a crisis.

Even so, it’s unclear how strictly rationing policies might be applied. “The German network regulator is receiving numerous requests for exemptions from gas rationing,” consultants Inspired Energy Plc said in a note. “This could reduce the impact of gas demand reductions, providing bullish pressure to near curve European gas.”

Shipments via Nord Stream, the main pipeline linking Russia to the continent, have been broadly stable at around 20% of the link’s capacity since late July, when Moscow cut shipments from 40%. Russia’s Gazprom PJSC has cited issues with turbine maintenance, including sanctions-related delays for the return of equipment, for the reduced flows.

The onshore gas pipeline that receives fuel from Nord Stream will need gas to operate this winter, according to network operator OPAL Gastransport. It issued a tender to seek supply of the fuel from Oct. 1-April 1.

Still, European gas stockbuild is running about nine weeks ahead of last year, helping to keep the price increase in check.