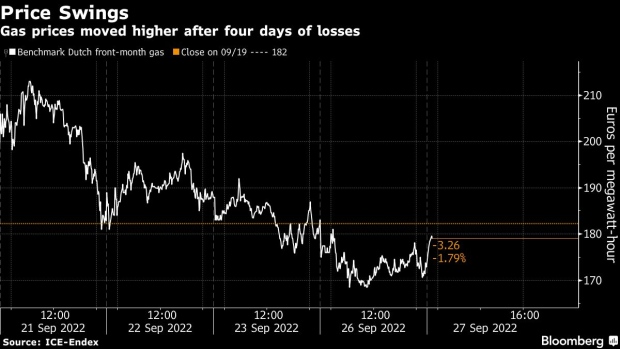 The gas receiving compressor station of the Nord Stream 1 natural gas pipeline in Lubmin, Germany, on Tuesday, Aug 30, 2022. A three-day halt of the Nord Stream pipeline -- a key source of natural gas for the European Union -- started on Wednesday, and concerns are widespread that Moscow will find another excuse to clamp down on supplies, putting the region at the mercy of the weather. , Bloomberg

(Bloomberg) -- European natural gas extended gains as a spat between Russia and Ukraine over fuel transit added to an already volatile market.

Benchmark futures surged as much as 22%, the most in three weeks, after Gazprom PJSC warned its Ukrainian counterpart that new arbitrations over payments might lead to Russian sanctions against Naftogaz. That means the little gas that’s still flowing to northwest Europe from Moscow through Ukraine is now at risk, just hours after news about damage to the shuttered Nord Stream pipeline to Germany.

Ukrainian state-run Naftogaz said earlier this month it’s seeking payments from Gazprom through a Swiss arbitration, demanding that all transfers are made in line with a ship-or-pay contract clause. The Russian exporter said it can’t pay for volumes that Ukraine is not accepting after one of two border points between the countries was put out of service by the Ukrainian grid operator after military action.

For now, orders for gas flows via Ukraine on Wednesday remain steady, according to Ukraine’s transit operator. But traders are watching closely for any updates as that’s the route still delivering roughly half of the remaining Russian gas flows to the European Union, with another half going through Turkey.

“It looks like the developments on Nord Stream 1 & 2 were just a prelude to this latest development,” said Tom Marzec-Manser, head of gas analytics at ICIS in London. “If Russia cuts flows through Ukraine, the EU can’t even now consider a late U-turn and ask for either Nord Stream to be opened to help the situation.”

The market has already been roiled by news that two lines of the key Nord Stream link and one line of the idled Nord Stream 2 were damaged, with gas leaks identified by Swedish and Danish authorities in the Baltic Sea. Two powerful underwater explosions were detected, according to Sweden.

There have been no gas supplies on this route from Russia over the past month, but the incident adds to nervousness in the market. Germany suspects an act of sabotage, according to a security official. Operating company Nord Stream AG said damage to the network was “unprecedented” and it’s impossible to tell when flows could technically resume.

Nord Stream delivered nearly 40% of Russia’s gas to Europe last year. But Gazprom slashed flows on that route in several steps starting in June, citing technical issues with equipment at its entry point, before halting supplies altogether. Nord Stream 2, which runs close to the first conduit, was built and filled with technical gas in 2021 but has never delivered any fuel to Europe amid the Kremlin’s standoff with the West.

Even in a worst-case winter scenario, in which there is no piped Russian gas and low demand destruction, BloombergNEF forecasts Europe should have enough gas to withstand the coldest winter of the last 30 years without depleting its storage.

Yet, the market may remain on edge even though zero supplies via Nord Stream for the foreseeable future have already been “factored in somewhat,” said Nick Campbell, a director at consultant Inspired Plc. “If there was sabotage then essentially it is escalating the war outside of Ukraine’s borders.”

The market had been relatively calm with prices hitting a two-month low on Monday as stockpiles build steadily to meet winter demand and nations take steps to reduce consumption. Storage sites are about 88% full, above the five-year average, even though Russia cut its pipeline exports to the bare minimum. Strong imports of LNG and mild weather forecasts for October -- after the current cold spell -- had also helped market nerves.