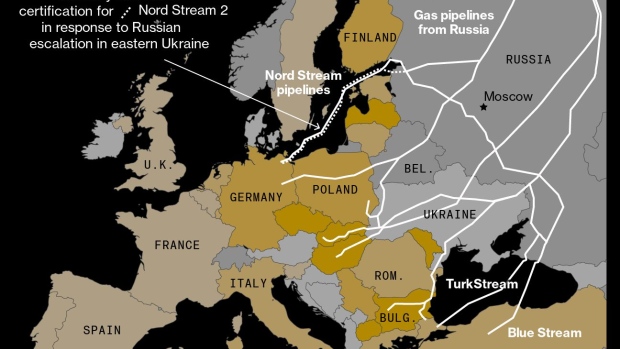 (Bloomberg) -- Natural gas prices in Europe jumped after Russia stepped up an energy war by cutting supplies through the largest link to the continent to less than half of its usual volumes.

Benchmark futures surged 8%. German Economy Minister Robert Habeck said Wednesday that he believes the reductions through the Nord Stream was “politically motivated” and not due to technical issues as Gazprom PJSC stated. Russia is seeking to unsettle markets and drive prices higher, he said. Chancellor Olaf Scholz is scheduled to visit Kyiv on Thursday along with other European leaders.

The cuts announced on Wednesday follow reductions the previous day after Gazprom cited issues with repairs of turbines produced by Siemens. European nations have for several months feared Russian gas supply cuts in retaliation for sanctions aimed at Moscow for its invasion of Ukraine in February. Russian gas transit via Ukraine has been curtailed since May 11, after one of two key cross-border points was put out of service amid fighting in the eastern part of the country.

Russia’s daily gas exports to its key foreign clients so far in June have tumbled to the lowest since at least 2014.

Dutch front-month gas futures, the European benchmark, were 7.6% higher at 129.49 euros per megawatt-hour by 8:10 a.m. in Amsterdam. They rose 44% in the previous two sessions.

The Russian reduction adds to a supply crunch already created by an outage in the US. A major liquefied natural gas export facility in Texas -- a vital source of supply for Europe -- will remain shut for longer than initially anticipated following a fire last week.

They comes just as a bout of intense heat that’s gripping Europe drives up gas demand for cooling. The continent, which has relied on US LNG to fill the gap resulting from lower Russian flows, may have to compete more fiercely with Asian buyers to secure spare supply as they rush to replenish storage facilities before demand peaks again in the winter.

The disruptions are stoking prices in Asia too. Asian spot LNG prices on Thursday were seen rising above $30 per million British thermal units for the first time since April, according to traders. That’s the highest level for this time of year, and a roughly 50% jump in the last month.