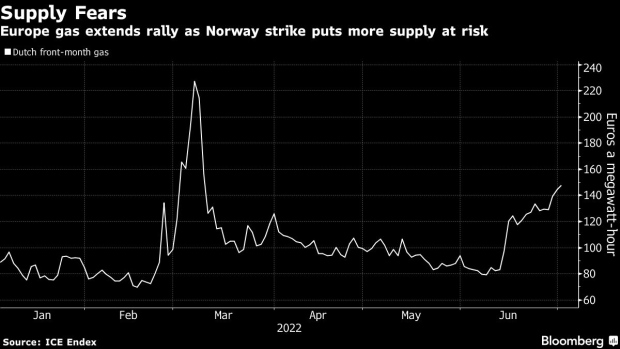 Benchmark futures rose as much as 2.7% on Monday after three consecutive weekly gains. About 13% of Norway’s daily gas exports are at risk amid plans to escalate an impending strike by managers, the nation’s oil and gas lobby warned over the weekend. Three fields are set to be shut by the strike starting Tuesday, while planned action the following day would take out another three projects.

That adds to fears that Europe may not have enough gas to fill storage sites in time for winter given lower flows from Russia and a prolonged outage at a key export facility in the US. The supply risks are spreading through the European economy and putting increasing stress on traders and utilities by boosting their funding requirements.

Read also: The Great European Energy Market Bailout Is Only Getting Started

Top industries in Europe’s powerhouse, Germany, could face collapse because of gas-supply cuts, the country’s top union official warned before crisis talks with Chancellor Olaf Scholz starting Monday. The energy crunch is already driving inflation to record highs, and could lead to social and labor unrest, Yasmin Fahimi, the head of the German Federation of Trade Unions, said in an interview with the newspaper Bild am Sonntag.

Russia has reduced shipments through its biggest Nord Stream pipeline by 60% and the link is scheduled for a full shutdown next week for maintenance. Germany has raised doubts that the link will resume supply following the works.