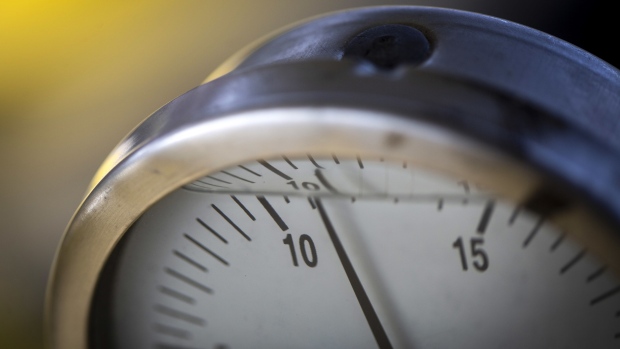 A pressure gauge on pipework at the Avala gas storage facility, operated by Srbijagas JP, in Avala, near Belgrade, Serbia, on Wednesday, Jan. 5, 2022. European natural gas prices have risen to records in recent weeks as Russian supplies slowed in the middle of winter. Photographer: Oliver Bunic/Bloomberg , Bloomberg

(Bloomberg) -- Natural gas in Europe settled at a record high for a second day, intensifying the pain for industries and households, and threatening to push economies into recession.

Benchmark futures rose as much as 9% after Russia’s Gazprom PJSC said it will stop the key Nord Stream pipeline for three days of maintenance on Aug. 31. The link has been working at just 20% capacity since late last month.

The market has further tightened in recent weeks as extremely hot and dry weather disrupts fuel transportation via rivers and limits hydroelectric and nuclear power production. Demand for gas is rising as a result at a time when Russian supply cuts are already slamming the region.

It’s been an unusual and difficult summer for Europe. Prices and demand typically ease during the warmer months, allowing the continent to pump gas into storage and prepare for the winter. But Moscow’s supply reduction through all major pipeline routes and searing heat waves have kept gas prices about 11 times higher than they usually are this time of the year.

The Dutch front-month contract, the European benchmark, closed at record-high 244.55 euros a megawatt-hour, posting a fifth straight weekly gain, the longest stretch since mid-December. The UK equivalent rose to the highest since early March.

The high prices have already forced about half of Europe’s zinc and aluminum smelting capacity to shut down over the past year, and more is set to go offline. Germany, among the worst affected, is risking an industry exodus as manufacturers of car parts, chemicals and steel struggle to absorb the energy prices. The government has urged consumers to lower demand, and on Thursday cut sales tax on gas to temporarily ease the burden.

Low water levels on the Rhine River prompted Shell Plc to cut production at its Rhineland oil refinery in Germany, the nation’s biggest oil-processing complex. Navigability through Europe’s most important commercial waterway has been hampered in recent days, but the water level at a key German chokepoint is forecast to surge early next week, offering some respite for barges carrying vital cargoes to traverse the waterway.

A prolonged and severe drought in Spain and Portugal is pushing baseload hydroelectric output to historical lows, prompting increased calls for gas-fired power, according to Bloomberg Intelligence.