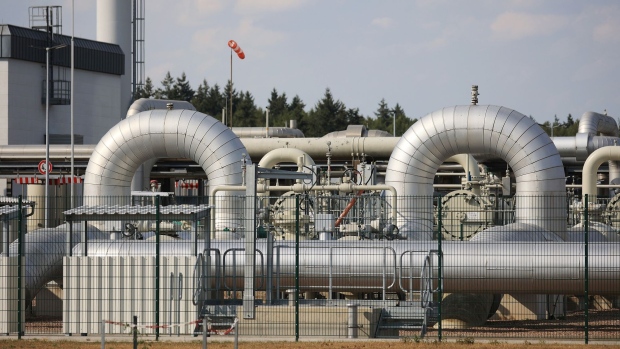 Questions remain about Europe’s ability to replenish storage sites next year in the absence of the usual volumes of Russian supply. , Bloomberg

(Bloomberg) -- Natural gas prices in Europe fell amid signs the continent will be able to navigate this winter with sufficient inventories, an influx of LNG and steps taken by the European Union to contain the crisis.

Benchmark futures declined 10%. European demand is likely to fall by a record 10% this year, and another 4% next year due to high prices, according to the International Energy Agency. Gas saving measures will be crucial to help stretch inventories to the end of winter even with dwindling Russian supply, it said.

Reduced consumption would give the European Union some breathing room as it tries to prevent shortages and blackouts. Ministers last week supported measures including a power-demand reduction goal and a profit grab from energy companies, and said more steps were likely this week. The issue of a cap on wholesale gas prices is set to return to the table.

Russia’s supply cuts have reverberated through the economy. Tensions heightened recently after blasts at the Nord Stream pipelines that European politicians are calling sabotage, and nations stepped up security at key energy assets. Gas has stopped leaking from three ruptured links, according to Gazprom PJSC, which also said it could ship fuel to Europe via the one undamaged section of the shelved Nord Stream 2 pipeline if European regulators approve. It’s highly unlikely to get the nod.

The Nord Stream leaks appear to end “hopes of a near-term recovery in Russian flows,” said Patricio Alvarez, an analyst at Bloomberg Intelligence. “A record influx of LNG and higher Norwegian imports are helping replace Russian supply” but there’s still the risk of shortages this winter, he said.

Russian gas is still flowing to Europe through Ukraine, but concerns about stoppages will remain as long as the war continues. There’s also supply through the TurkStream pipeline to some smaller consuming nations and Turkey. Over the weekend, Gazprom PJSC suspended deliveries to Italy in an apparent scuffle over regulation in Austria. Eni SpA is working with Gazprom and Austria to restore flows.

Dutch gas for November delivery, a benchmark for Europe, closed at 169.912 euros a megawatt-hour. The UK equivalent contract fell 16%. German power for next month also fell as much as 10.2% to 380 euros per megawatt-hour on the European Energy Exchange AG.

A big question remains about Europe’s ability to replenish storage sites next year in the absence of the usual volumes of Russian gas. Reserves are currently about 88% full, aided by high imports of liquefied natural gas, but they will get eroded over the coming colder months.

The IEA said gas saving measures will be crucial to minimize storage withdrawals and stretch the inventories to the end of the heating season.

“It is very unlikely that Europeans will freeze this winter due to gas supply cuts,” Timera said. “It is demand that will need to react to balance the market and avoid outright supply cuts.”

Europe Could Survive Energy Crisis But Climate Goal Is at Risk: BI