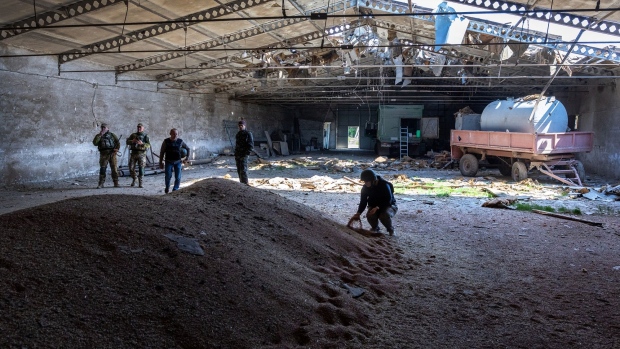 Jens Stoltenberg, secretary general of the North Atlantic Treaty Organisation (NATO), during his special address on day two of the World Economic Forum (WEF) in Davos, Switzerland, on Tuesday, May 24, 2022. The annual Davos gathering of political leaders, top executives and celebrities runs from May 22 to 26. , Bloomberg

“This is using hunger and grain to wield power,” von der Leyen said Tuesday in a speech at the World Economic Forum in Davos, Switzerland, where she decried “Russia’s blackmail” and compared Moscow’s actions to Soviet-era crop seizures and the 1930s famine.

Von der Leyen said the EU was working to get the 20 million tons of wheat stuck in Ukraine to global markets by opening “solidarity lanes” linking Ukraine’s borders to European ports as well as financing different modes of transportation and stepping up Europe’s own production.

The war in Ukraine and the future of the NATO alliance dominated a number of speeches at the gathering in Davos.

Estonian President Alar Karis told Bloomberg on the sidelines of the conference that there was increasing support in Europe to send warships to the Black Sea to escort freighters carrying Ukrainian grain, despite concerns it could escalate the war. Meanwhile, Polish President Andrzej Duda, speaking on a panel, warned of potential civil unrest in North Africa unless Ukraine is able to ship its grains, with the potential for a “gigantic migration problem” for countries such as Spain.

NATO Secretary General Jens Stoltenberg also took the stage in Davos on Tuesday, reiterating he was confident Sweden and Finland could overcome Turkey’s opposition to their membership of the military alliance and that its security concerns would be addressed. Turkey has expressed concerns the countries support Kurdish groups it views as “terrorists.”

The Nordic countries’ bid “demonstrates that European security will not be dictated by violence and intimidation,” Stoltenberg said.

To assuage Turkey’s complaints, Finnish foreign minister Pekka Haavisto said on a panel Sweden and Finland were both sending delegations to Ankara tomorrow. But Turkey’s concerns may also extend to other NATO allies, he said, despite repeating his optimism the issues would be resolved.

Finland also expects Russia to retaliate for its NATO application with “some hybrid attacks in the form of cyber and information wars” but military action isn’t very likely, the country’s former prime minister, Alexander Stubb, said in an interview with Tom Keene and Lisa Abramowicz on Bloomberg TV. It’s managed to cut dependence on Russian energy by diversifying earlier, he said, adding that “we’ve seen energy being weaponized.”

In a keynote speech, Spanish Prime Minister Pedro Sanchez said that the NATO summit to be hosted in Madrid in June will serve to show the unity of the alliance both within the organization and within the EU. As part of this, organizers are preparing a dinner that will include both NATO members and non-member EU countries, he said.

Karis said Estonia continues to push for more NATO troops with a permanent presence on the eastern flank, even as he said Russia was “ill-prepared” for the war in Ukraine, making it unlikely they would manage to attack other countries in the neighborhood.

Despite the harsh criticism of Russia’s actions, officials left an opening for a return to cooperation between Russia and Europe.

If the country ever here to find its way back to democracy, rule of law, respect for the international rules-based order, then Russia could find its place in Europe again, von der Leyen said.