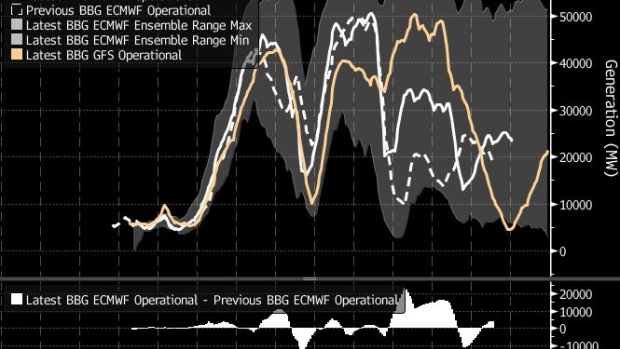 (Bloomberg) -- German power prices for Tuesday jumped to their highest in more than a month as output from thousands of wind turbines across Europe’s biggest market plunged.

Less wind output forces utilities to burn to more expensive, non-renewable sources of energy, including gas and coal, which increases the price of electricity. Wind output will be as low as 4,542 megawatts on Tuesday morning, compared with about 6,200 megawatts on Monday.

German day-ahead power rose as much as 58% to 275 euros a megawatt-hour with brokers in early trade. That’s the highest since Dec. 21 when rates hit a record.

Prices may have surged even higher if it wasn’t for the mild weather. Temperatures in Germany are about two degrees Celsius above normal, according to weather data on Bloomberg.

Longer term prices also surged on concern that about Russia’s movements on Ukraine’s border could lead to an invasion. That might put Europe’s gas supply in peril and push up the cost of running coal-fired power stations across the continent. German year-ahead power rose as much as 5.6% to the highest level since Jan. 6.