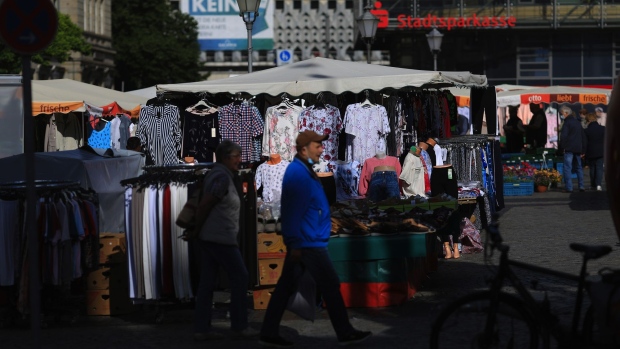 Shoppers pass a clothes market stall near a Stadtsparkasse bank branch in Magdeburg, Germany, on Thursday, May 28, 2020. German Chancellor Angela Merkel’s government is preparing a bundle of measures to put Europe’s largest economy back on track after a nosedive triggered by the coronavirus pandemic. Photographer: Krisztian Bocsi/Bloomberg , Bloomberg

(Bloomberg) -- Fears of a European recession may be overblown as demand is holding up and unemployment hovers near a record low, according to Thijs Knaap, chief economist at Dutch pension provider APG Asset Management.

A downturn “doesn’t seem to be an imminent risk,” Knaap said Friday in an interview in Amsterdam, putting the chances of one happening at “50-50.”

Even if a slump ensues, it doesn’t look like it will be “bone-breaking,” he said. “If it does occur, it’s another wobble coming out of Covid going into the new normal.”

Knaap’s view is at odds with a rising number of economists. They say a euro-zone recession is increasingly likely as record inflation haunts businesses and households, Russia threatens to cut off energy supplies and a drought closes key waterways.

The second quarter, however, delivered bumper growth of 0.7% from the previous three months, thanks to generous fiscal support and a post-lockdown splurge on tourism. Industry data released Friday, meanwhile, also signaled unexpected resilience.

An economic downturn won’t stop the European Central Bank from continuing to raise interest borrowing costs, Knaap said, predicting the deposit rate will end up at 1.25% “in the very long run” compared with 0% now.

“At the rate they’re going, we could certainly be there at the end of next year,” he said. “I can’t imagine the ECB straying from the path and saying, ‘No, we don’t have faith in the one instrument that we have to contain inflation.”