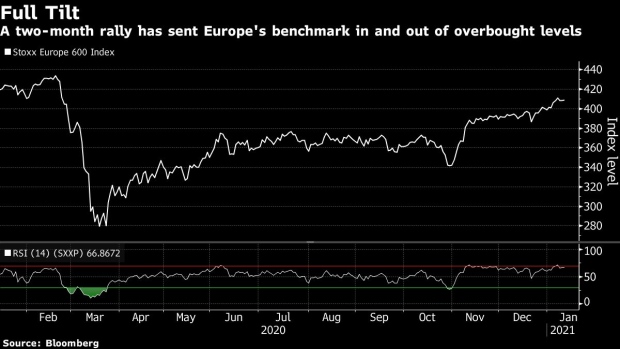 (Bloomberg) -- European stocks rose for a third day, with cyclical sectors outperforming as U.S. President-elect Joe Biden prepares to unveil a pandemic relief package that may amount to $2 trillion, which may help boost economic recovery.

Italian stocks underperformed after the nation’s ruling coalition fell apart, putting Prime Minister Giuseppe Conte’s government at risk of collapse. The country’s banks, sensitive to the now-widening spread between Italian and German government bonds, weighed the most on the FTSE MIB Index, which dropped 0.5%.

The Stoxx Europe 600 Index gained 0.7% by the close in London, with a clear pattern of economically sensitive industry groups advancing the most, led by miners and travel shares. Automakers also rose, with Peugeot SA rising to the highest level since November 2019 ahead of the completion of its merger with Fiat Chrysler Automobiles NV.

European equities have held steady this week, after starting off the new year by extending their recovery to levels not seen since February 2020. With valuations stretched and the region’s benchmark near overbought levels, widening lockdowns and the emergence of new virus strains are hampering near-term upside.

The tech sector on Thursday surged to the highest level since February 2001, or the period after the bursting of the dot-com bubble. Chipmakers, including ASML Holding NV, got a boost from Asian Apple supplier Taiwan Semiconductor Manufacturing Co.’s update and capital spending plans.

“The market is a bit overheated,” Guillermo Hernandez Sampere, head of trading at MPPM EK in Eppstein, Germany, said in an interview. “It’s time to let off some steam to get us to valuations that more adequately reflect the global economic environment”

Hernandez expects a mild correction in the first quarter, and said he currently holds a cash position of 10% to 15% instead of the usual low single-digit percentages, reflecting his defensive posture.

(A previous version of this story corrected the second paragraph to say Renault, not Peugeot, unveiled a plan to improve profitability.)