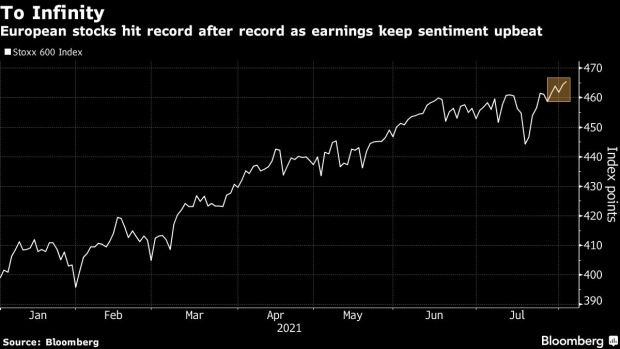 (Bloomberg) -- European stocks advanced to a fresh record high on Tuesday as investors were reassured by positive earnings updates from banks and energy companies.

The Stoxx Europe 600 Index ended the session with a gain of 0.2%, with France’s CAC 40 climbing to its highest level since September 2000. Lenders outperformed as Societe Generale SA and Bank of Ireland Group Plc rallied after boosting their outlooks. BP Plc pushed oil producers higher after increasing its dividend and announcing a buyback.

European equities are scaling new peaks as positive earnings updates outweigh risks from the spread of the delta virus variant, China regulatory crackdown and inflationary pressures. However, some market players expect market volatility to pick up in the coming months as investors become more selective with equities trading at historical highs.

“Across all of the regions it’s been a stellar earnings season,” Seema Shah, chief global strategist at Principal Global Investors, said by phone. “Even though expectations were already quite high, they weren’t even high enough, it seems.” Shah said it’s most likely that the U.S. has already hit peak earnings growth, with Europe not far off it.

Grace Peters, EMEA head of investment strategy at JPMorgan Private Bank, said in an interview with Bloomberg TV that she sees an “unwarranted gap” between European and U.S. stocks, and there is an opportunity for European equities to catch up.

Tech heavyweight Prosus NV tumbled 6.9% along with Tencent Holdings Ltd., in which Prosus holds a stake, after an offshoot of China’s official news agency attacked online games for being “spiritual opium.”

Smiths Group Plc fell 10%, the most since March 2020, as analysts said the total value of a deal to sell its medical division was disappointing.