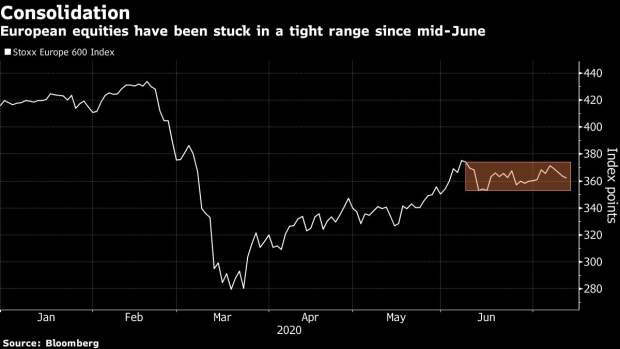 A statue of Mercury, the Roman god of trade, stands in front of the AEX index curve inside the Amsterdam Stock Exchange, operated by Euronext NV, in Amsterdam, Netherlands, on Tuesday, June 16, 2020. For two years in a row, Europe’s largest stock-market listings have taken place in Amsterdam, which has beguiled companies with a deep pool of international investors and corporate governance norms that tilt in favor of management teams. Photographer: Yuriko Nakao/Bloomberg , Bloomberg

European stocks slipped lower on Friday and are set for a weekly decline, amid concern that the spike in coronavirus cases in Asia and America will derail the global recovery.

The Stoxx Europe 600 Index fell 0.4% as of 8:14 a.m. in London, dragged by basic resources and energy shares. Real estate and technology were among a handful of sectors to advance.

Record spikes of Covid-19 infections in Hong Kong and Tokyo fueled fears of a second wave hitting Asia, while Florida, Arizona, Texas and California saw deaths hit record levels and the infection rate for the U.S. topped the average.

European shares have been trading in a tight range since mid-June, as investors weighed the unprecedented central bank and government stimulus, against the effect of the pandemic on the economy. Caution ahead of the start of the second quarter earnings season, and rising infection cases in America added to the worries.

“Despite ongoing volatility, we continue to suggest investors stick to their long-term strategic equity allocations but react to the larger swings by frequently rebalancing,” says Richard Flynn, U.K. managing director at Charles Schwab. “This allows portfolios to stay in gear by trimming into strength and adding into weakness, rather than trying to time short-term peaks and troughs.”