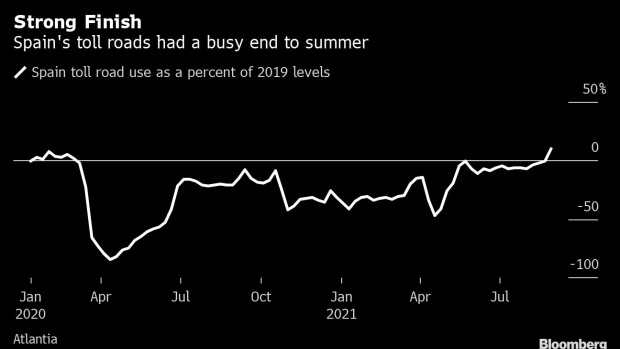 (Bloomberg) -- Europe has transformed from an oil-market weakling into a source of strength -- whether it’s crude consumption from the continent’s refineries, surging traffic data, or rebounding fuel prices.

“August 2021 would be the best month of August since 2011,”  Hedi Grati, an executive director at IHS Markit, said of the firm’s estimate for European gasoline demand. “The ten years in between were all lower.”

The pickup for the automotive fuel is partly a function of people driving more to take their vacations. It marks a stark change in fortunes for Europe, where months of lockdowns to combat the spread of Covid-19 previously hit the region’s oil consumption hard and triggered a major retrenchment within the continent’s refining industry. The demand boost appears to be filtering into the wider market, with traders reporting strong demand from local refineries for crude.

Traders measure the strength of petroleum products through what’s known as the crack spread: the difference in cost between fuels and the crude from which they are made. For gasoline, that measure is now at about $9 a barrel in northwest Europe for October, more than double where it was in January. Underpinning the demand has been an ongoing shift from diesel to gasoline-powered cars following the VW emissions scandal.

The surge in holiday-season driving that’s further firing the rally is visible in traffic data.

Toll-road usage in Spain was up 10% on the equivalent week in 2019 in the most recent data, the strongest week since the pandemic began, according to Atlantia, which operates such roads. The firm’s data show that Italian highways were almost 3% busier than 2019, while figures in Poland also reveal busier roads than 2019. In France, highway traffic climbed by more than 6% above 2019 levels in July, toll operator Vinci said. August figures are due later this month.

The strength being observed in Europe is not unique to the continent. With demand in Brazil above 2019 levels and the U.S. close to it, those markets are pulling oil demand higher too, said Giovanni Staunovo, commodity analyst at UBS Group.

Gasoline traders painted a bullish picture of recent European demand, with one saying it was at or above 2019 levels for the holiday period. Another person involved in the gasoline market said they had seen strong interest in components used to make the road fuel. Stockpiles held in independent storage in Amsterdam-Rotterdam-Antwerp are at their lowest since 2016, recent data show.

That strength is filtering into crude markets. Demand from European refiners for light, sweet crude remains very strong. Caspian CPC Blend recently traded at about $1.50 a barrel below Dated Brent, compared with discounts of about $2 a month ago, said traders involved in the market. Most such cargoes for September loading have already been cleared, a faster pace than normal.

Other sweet grades in the Mediterranean and North Sea are also holding well. Traders report that strong demand from European refiners is helping to offset lackluster interest from Asia, with flows curtailed by a relatively high Brent crude price, and a cut in import quotas for China’s teapot refiners.

So-called light, sweet grades -- those that are low in sulfur and less dense -- are easier to turn into gasoline.

While gasoline demand has strengthened, not every oil product is faring so well. Europe’s air traffic is still about 30% below 2019 levels, according to data from Eurocontrol. That’s sapping jet fuel consump[tion. The continent’s August demand for diesel-type fuel -- roughly triple that of gasoline -- is also seen at 4% below the 2019 level by Grati.

“Pent-up demand to some extent is helping, but also lifting of restrictions earlier this year and no additional measures despite rising cases,” Staunovo said.