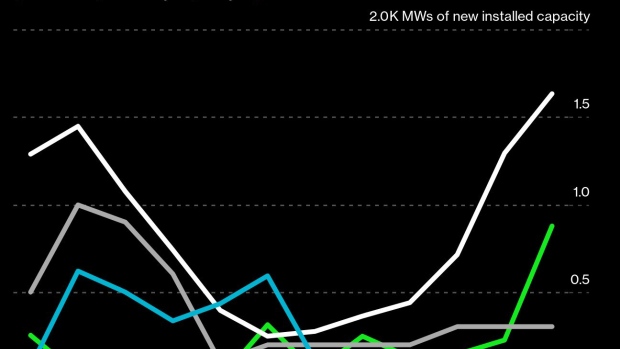 Households across Europe are taking steps to slash their energy use on concern the unprecedented squeeze on supply will keep prices high way beyond winter.

Energy bills are climbing across the continent, with homes set to pay on average 54% more than they did two years ago, Bank of America Corp. data show. That cost surge is driving demand for solar panels and extra insulation as people seek to ease the pressure on their wallets.

Rooftop solar is “going to grow quite substantially all over Europe,” said Vegard Wiik Vollset, head of EMEA renewables at researcher Rystad Energy AS. “The potential of reducing your electricity bill with these sort of installations is now suddenly a lot more attractive” amid higher energy prices.

France saw the biggest expansion in rooftop solar in Europe last year, with new installations jumping almost fourfold, according to Rystad. Germany was still first in terms of volume, adding more than 1,600 megawatts of capacity. The growth in both countries builds on an existing trend, with more and more residents opting to “green” their homes in recent years.

Consumers are rushing to contain the spike in bills as supply constraints and the transition to renewables look set to keep the market volatile. Households, which constitute about a quarter of European Union energy use, are feeling the impact of wholesale gas costs that are four times their level a year ago.

Some have received state support. With the help of EU funds, the Italian and Spanish governments have pledged 12 billion euros ($13.7 billion) and 3.4 billion euros, respectively, to improve energy efficiency in homes through to 2026, according to figures from the Bruegel think tank. Germany and France have promised multibillion-euro packages through 2023.

Europe is also pulling in private investment for such solutions, with companies expanding offerings for solar panels, home batteries and smart meters.

“People are doing it because they save a ton of money,” said Alex Mezler, chief executive officer of German solar provider Zolar GmbH, whose sales doubled last year. A typical rooftop system -- with storage battery and add-ons including car-charging -- gives customers a profit of around 27,000 euros if it’s operated for around 25 years, Mezler said in an interview.

The takeup of such technologies varies widely across the continent. In the U.K., whose housing stock is older than any EU country’s, improving insulation is a major challenge. Homes there lose heat faster than anywhere else in western Europe. Yet a survey late last year showed less than a fifth of Britons were considering improvements to home energy efficiency. Among those not contemplating changes, more than a quarter said they cost too much.

For European households that do have the cash or incentives to make modifications, the impact on bills can come quickly. But it could take years for those actions to become sufficiently widespread to cut national energy demand significantly.

“Residential energy-efficiency measures take time to roll out results at scale, so we cannot expect them to help us reduce household energy demand next winter” on a national level, said Simone Tagliapietra, a senior fellow at Bruegel. “Apart from these more structural and long-term measures, there is actually very little that can be done in the short term.”