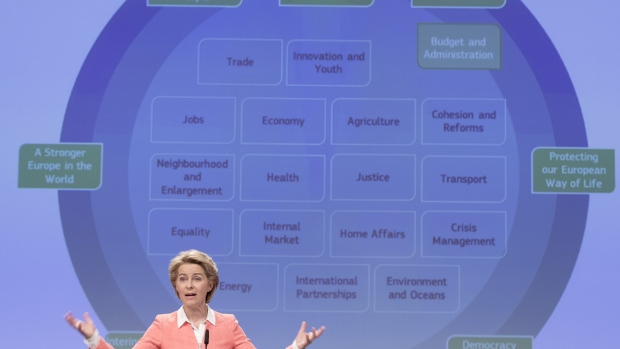 (Bloomberg Opinion) -- Ursula von der Leyen, the European Commission president-elect, has promised to run a “geopolitical Commission” in the next five years. A recent study by the European Council on Foreign Relations, the international think tank, shows that this is what Europeans want, too — but von der Leyen’s vision of the European Union’s global role isn’t necessarily aligned with theirs.

Von der Leyen’s description of her mission builds on her predecessor Jean-Claude Juncker’s idea of a “political Commission,” one that represents the democratic will of European citizens rather than the policy preferences of an unelected technocratic elite in Brussels. The president-elect cannot quite make the same promise: She got her appointment as a result of backroom dealing by national leaders, not by any democratic process. What she proposes instead is to run the European Union’s policymaking and regulatory body as the united front Europe presents to the world.

“This team,” she declared when presenting the commissioners-designate earlier this week, “will shape the European Way: We will take bold action against climate change, build our partnership with the United States, define our relations with a more self-assertive China and be a reliable neighbor, for example to Africa.”

The goal of defining the EU’s role in the world is in line with what Europeans want from the bloc. This year, the foreign-relations council commissioned YouGov, the polling organization, to survey more than 60,000 people throughout the EU, and discovered “widespread public support for the idea of the EU becoming a cohesive global actor,” according to council senior policy fellow Susi Dennison. But the survey also revealed “a growing divergence between the public and the foreign policy community on several key issues — ranging from trade and the transatlantic relationship to EU enlargement,” Dennison wrote.

As one can see from von der Leyen’s remark, she holds the traditional view that the U.S. is Europe’s ally and that China’s growing assertiveness is a worry if  not a threat. But the foreign-relations council survey shows that the dominant view among voters in Europe is that both the U.S. and China are the EU’s geopolitical rivals. If the EU broke up tomorrow, the survey revealed, the biggest loss to people in most member states would be its ability to act as a continent-sized power in contests with the U.S., China and Russia.

Perhaps the most surprising revelation, given that all but five EU countries are also North Atlantic Treaty Organization members, is that Europe wouldn’t necessarily back the U.S. in such contests. The clear preference is for neutrality, even in countries like Poland where the U.S. is popular.

Europeans are clearly more pro-U.S. than pro-Chinese or pro-Russian. Majorities or large pluralities exist everywhere for continued economic sanctions against Russia. In every EU country where the survey was taken, voters also believe that the EU, the national government or both should do more to protect that nation’s economic interests vis-a-vis China. But the craving for a neutral status shows that President Donald Trump’s isolationist instincts may be vindicated and that NATO isn’t necessarily the right framework on which the U.S. should base its relationship with Europe.

For von der Leyen, on the other hand, it means there’s more popular support than usually assumed for more intra-EU defense and security cooperation. Such projects had a hard time getting off the ground under Juncker, and the new Commission structure doesn’t appear to attach more importance to them. The von der Leyen Commission doesn’t even have a separate security portfolio (British Commissioner Julian King holds it in the outgoing lineup).

The survey shows that in every participating country except France, pluralities think their own government would do better at representing the national economic interest than the EU; in France, the most popular answer is that “both” would do best. This should be a worrying signal for von der Leyen – but in her Commission, the trade portfolio hasn’t increased in importance compared with the Juncker Commission. If the new president were thinking geopolitically, it probably would have made sense to appoint at least a Commission vice president to represent Europe in an era of trade wars and the World Trade Organization’s decline.

Von der Leyen appears to be doing better on other points of the EU’s geopolitical agenda. For example, majorities throughout the EU consider climate change to be a major challenge, and she’s elevated the issue to the top of her agenda by handing it to one of her three executive vice presidents, Frans Timmermans.

The appointment of Hungary’s representative Laszlo Trocsanyi to deal with EU enlargement also makes sense. Pluralities in the EU’s wealthier countries, including Germany, Austria, France and the Netherlands, are against admitting Serbia or other new western Balkan states as members in the next 10 years, but expansion is much more popular in the continent’s south and east; 55% of Hungarians believe that all or some western Balkan states should join in the next decade.

Overall, however, the president of a truly geopolitical Commission would make it clearer than von der Leyen does that the EU aims for the kind of strategic sovereignty that other big players, such as the U.S., China and Russia, are increasingly asserting without regard for others’ interests. “The new leadership of the EU’s institutions now needs to take brave decisions and accept – as voters have — that the world has changed,” Dennison wrote.

Stressing this acceptance and standing up more vocally, and more effectively, for Europe’s distinct interests can, in the longer run, make a stronger, more federalist EU more palatable to voters. In the next five years, it’s up to von der Leyen to earn that extra credibility — or waste a chance to do so.