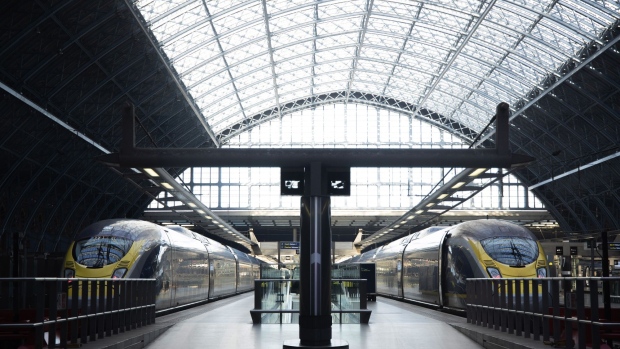 Eurostar International Ltd. trains at St Pancras International Station in London, U.K., on Monday, Jan. 25, 2021. France and the U.K. are negotiating an aid package for Eurostar after the coronavirus crisis wiped out 95% of the Channel Tunnel train operators passenger traffic. , Bloomberg

(Bloomberg) -- The wave of strikes set to hit Britain’s rail network worsened after two unions announced a series of new dates in the run up to Christmas.

Eurostar International Ltd. security staff will strike for four days next month in a dispute over pay, threatening to disrupt thousands of journeys between the UK and continental Europe.

The walkouts by members of the National Union of Rail, Maritime and Transport Workers will take place on Dec. 16, 18, 22 and 23, the labor group said in a statement Wednesday. Around 100 security staff employed by facilities management firm Mitie Group Plc are expected to participate, it said.

Later, another union announced strikes on the UK’s popular West Coast line, run by FirstGroup Plc-controlled Avanti, on Dec. 13, 14, 16 and 17, as well as C2C services between London and Essex on Dec. 17. The Transport Salaried Staffs’ Association also said members will not cover for other workers from Dec. 13, affecting multiple train companies and track owner Network Rail Ltd.

“A meaningful offer could and should have been made by now which would have settled this dispute,” said TSSA Organizing Director Luke Chester. “Until that happens our members will not back down.”

The festive season is one of the busiest periods for Eurostar, whose express trains via the Channel Tunnel link London with destinations including Paris, Brussels and Amsterdam, as well as Alpine ski resorts, the Mediterranean and the French outpost of Disneyland.

RMT General Secretary Mick Lynch said in the statement that a pay offer below the level of inflation was made to security personnel who receive as little as £10.66 ($12.80) per hour but are “essential to the running of Eurostar.”

The rail operator said that the workers concerned operate X-ray machines and conduct preliminary exit checks in the UK, though passport control booths are staffed by French border officials.

“If there is an impact on our services we will let our customers know,” a Eurostar spokeswoman said, adding that the company is aware of ongoing negotiations between Mitie and the union.

The security staff strike dates overlap with the national RMT walkouts that are already likely to impact Eurostar, which is controlled by French state railway SNCF.

In a rare positive development amid Britain’s multitude of transport disputes, three days of strikes involving 2,000 Metroline bus drivers in north and west London that had been due to begin Thursday were called off following an improved pay offer from the Singapore-owned firm.

The Unite union said that the proposed deal emerged following talks brokered by the state-backed Advisory, Conciliation and Arbitration Service and will be put to a ballot of members. Separate action by drivers at Abellio in south and west London will go ahead as planned.

--With assistance from Christopher Jasper.